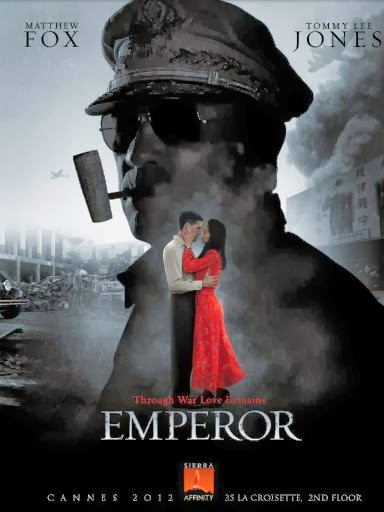 “Emperor” is a 2012 American-Japanese joint production directed by Peter Webber of Great Britain and starring American actors Matthew Fox as Brigadier General Bonner Fellers and Tommy Lee Jones as Allied Supreme Commander Douglas MacArthur about the investigation of HM the Showa Emperor for war crimes in the wake of World War II. Filmed mostly in New Zealand and on a rather limited budget, which really doesn’t show as the mixed-in CGI was handled very well, the movie purports to deal with the overall theme of “justice or revenge”. Unfortunately, like so many historical films, the factual story is frequently set aside in favor of a really rather unnecessary romantic subplot. Rounding out the cast is the lovely Eriko Hatsune as Aya Shimada, Toshiyuki Nishida as General Kajima, Masatoshi Nakamura as Prince Fumimaro Konoe, Kaori Momoi as Mrs. Kajima and Colin Moy as General Richter. Aside from the actors brought in from Japan, most of the supporting cast consists of New Zealanders in the role of American military personnel.

The film opens with stock footage of the atomic bombing of Nagasaki and shots of the utter devastation that was post-war Japan. The film is set, for the most part, in Tokyo which is nothing but rubble and it is mentioned how the American bombers turned the city into history’s largest crematorium by use of fire bombing and one raid on Tokyo alone taking the lives of 100,000 people. Early on we are introduced to General Fellers and the first of many flashbacks filling us in on his past romance with a Japanese girl named Aya Shimada, the niece of General Kajima. Upon arrival, Fellers is first tasked with apprehending 30 Japanese leaders for war crimes, starting with former Prime Minister Hideki Tojo (Shohei Hino). They arrive just after General Tojo shot himself in the chest but, of course, he lived as General MacArthur was very specific that every effort was to be taken to keep him alive long enough for him to be executed (you know, after that silly formality called a “trial”). As soon as that was done General MacArthur explains that the government in Washington wants to see the Emperor executed as a war criminal and he gives General Fellers ten days to investigate the guilt or innocence of the Emperor and then present his recommendation to MacArthur. More than anything else, MacArthur is most concerned with making the occupation as peaceful and efficient as possible and rebuilding Japan according to American values.

We then move into the main theme of the film which consists of General Fellers meeting with key Japanese officials, always after considerable resistance, attempting to determine the guilt or the innocence of the Emperor always to be met with no real answers to his satisfaction but then being sent to meet with someone else and the process begins again. Mixed in with this are numerous flashback scenes to his romance with Aya who he met in college. After returning home unexpectedly, Fellers meets her again in Japan just before the war where he is writing a paper on the mindset of the Japanese soldier. Aya introduces him to her uncle General Kajima who tells him that if Japan fights the United States, the Japanese will win because they follow the divine will of the Emperor. Aside from these occasional flashbacks on the odd drive through the country by Fellers in his efforts to locate Aya, what we get is a series of interviews between Fellers and Japanese officials that really result in no answers at all for his questions. It makes for a rather stale film at times, helped in no small part by the fact that we all know how it is going to end. We know the Emperor was not deposed and executed and that the Japanese monarchy continues to reign. So, something more is needed to make for an interesting movie, some new aspect or fresh look at things and, unfortunately, this is just not delivered.

An attempt at tension is made when General Fellers, frustrated by the fact that he keeps coming up with unsatisfactory answers to his questions, finally sits down and types up a recommendation that the Emperor, in whose name everything was done, be deposed and put on trial. But, again, the problem with that is that we know it is not going to happen. The only bit of information, revealed toward the end of the film, that many may not know about, is the attempted coup at the Imperial Palace when the Emperor told the civil and military leadership that the war had to stop. This was a dramatic revelation and was handled well, however, it is not exploited to the fullest. For instance, no one does the reasoning that this rather disproves the oft-repeated line that, even if he did not give the order to go to war then he could have stopped it because everyone would have obeyed him no matter what. They could have delved more into the mentality, which has arisen several times in Japanese history, that sometimes action must be taken to “save” the Emperor from himself; basically those professing loyalty behaving in a disloyal fashion in order to pursue their own agenda. Yet, this is another opportunity lost.

“Emperor” largely re-treads old ground rather than taking the opportunity to delve into issues that, even today, remain unaddressed. Why, for example, should anyone in Japan have been willing to trust the Americans to mete out justice when even in the United States there was no justice for American citizens? This was the same country that had put Japanese-Americans in internment camps, that had laws prohibiting immigration from East Asia, which still had racial segregation in place. Given that, why should anyone in Japan have expected justice or been prepared to trust the Americans at all? Unfortunately, the issue is not addressed. Nor, just as sadly, is the entire issue of the war crimes trials. That could have made for a very thought-provoking film. General Tojo, for example, has a brief appearance (non-speaking but powerful nonetheless) and this was a man whose life was saved by the Americans only so he could be executed later on the charge of “waging an aggressive war” in spite of the fact that there was no law against such a thing in 1937. And, if the law is to be applied retroactively (as it was); why were no charges filed against the Soviet Union for invading the Baltic states, Finland, Poland, China or Mongolia? Why were they and Great Britain not charged for having invaded neutral Persia? This was a missed opportunity to really challenge the audience to think about their own assumptions but, alas, it was not taken. The closest we came was when Fellers interviewed Prince Konoe who asks him, rather pointedly, if it was wrong for Japan to invade China, why was it not wrong for the British or the Portuguese? If it was wrong for Japan to invade the Philippines, Indochina, Malaysia and Indonesia why was it not wrong for the Americans, French, British and Dutch who had done so first? All we get is a petulant Fellers saying he did not come for a history lesson, yet, a history lesson is exactly what the filmmakers seem to be trying to do but they fail to actually teach us anything that most do not already know.

Instead, what we are given is simplistic, good guys and bad guys with the Americans being more pragmatic than just. Getting rid of the Emperor would cause problems for their occupation and agenda for post-war Japan and it is as simple as that. Like so many historical films, “Emperor” is a case of many missed opportunities for something much better. Still, it would be wrong to say that this was an entirely bad film. Its sins are mostly those of omission. It does show, realistically, the post-war devastation of Japan and the point is made (hopefully the audience is not too bored to notice it) that the Emperor acted with great courage in questioning the leadership and finally in determining to end the war and make peace. The closing scene in which MacArthur and the Emperor met was moving (at least I found it so) as the Emperor offered to accept all responsibility on himself rather than see his country and his people suffer anymore. Ultimately, the Emperor emerges from the film much better treated than one would expect. The final point the film closes on being that, while it is impossible to know if the Emperor could have prevented the war, what is certain is that he was instrumental in stopping it and his action, even in the face of armed rebellion, saved the lives of a great many Americans and Japanese alike. Far from being vilified, he should be admired. Of course, saying so would be expecting far too much from a film in the atmosphere of today.

Was it good? It would probably be better to say that it wasn’t bad. The actors performed well even if some did have no depth to them, the visuals were good but it fails to really stand out as it has nothing new to offer and seemed to ignore major issues in preference for trivial ones. Those interested in the period or the subject matter will give it a chance, those who are not will skip it and they really will not be missing much.