The Crown Passes to Umberto II 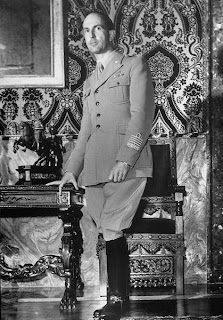 ﻿
It was on this day in 1946 that, with the abdication of HM King Vittorio Emanuele III, the Italian throne passed to his son, the last to occupy it, HM King Umberto II. He had already served some time as effective head-of-state since his father had semi-retired and made the Prince of Piedmont the "Lieutenant General of the Realm". In that capacity he had worked well with the Allied commanders on the scene, who were impressed by his devotion to his country and his diligence. However, most of the Allied governments were opposed to him and to the continuation of the Kingdom of Italy to varying degrees. He appointed new ministers, bringing in representatives from every level of society. Because the question of whether Italy would remain a monarchy or become a republic had not been settled, in an effort at even-handed fairness, King Umberto II did not require his new ministers to take the usual oath of allegiance to him, though Ivanoe Bonomi chose to do so anyway. In an interview he said that, after the fascist era, Italy would have to move to the left but that the monarchy was needed to stabilize the country during such a shift and warned that a republic could lead to a presidential dictatorship. He also pledged considerable reforms to the Italian constitution.

However, the Allied powers were not receptive to the efforts of King Umberto II to encourage friendship and closer cooperation. He supported Italy becoming a fully independent member of the western alliance, already envisioned at that time because of the growing communist force in the east and hoped that by showing good faith the Kingdom of Italy would be allowed to keep her colonies (gained before the Fascists came to power) and be given a fair and just frontier with Yugoslavia. All of these efforts were blocked, partly because of the attitudes of the Allies themselves and partly because of pressure brought on them by their Soviet partners. They refused to permit the printing of monarchist newspapers and when the King asked British Prime Minister Churchill for a message of support for the Italian Crown he was met only with silence. The other powers proved unwilling to grant the slightest favor to the side which had turned Italy from an enemy into an ally, even though previously great promises had been made to Mussolini if he would only have done the same. It is ironic that what had been offered to the Duce by his enemies would not be granted to the King who had always opposed him. Whereas Mussolini had been offered the restoration of all pre-war Italian territory and even territorial gains in the Balkans if he would abandon the Axis, after the King did just this, Italy was to gain nothing, maintain nothing and lose everything. 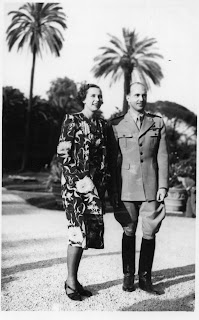 King Umberto II came to the throne with a great deal more support, among Italians at least, than he is usually given credit for. He was very popular with the army (most of whom would not be allowed to vote in the upcoming referendum), those on the right and the moderate left supported him (the center was ambiguous) and he was well liked by the Vatican because of his sincere Catholic faith. The biggest obstacles to his short reign were the communists, whose partisan bands re-emerged as soon as the Fascist threat had passed, and the die-hard Fascists of Mussolini's puppet Social Republic. It would certainly have been better for Italy and for the Allies themselves to have supported the King in standing opposed to these revolutionary factions. With the country under occupation, there was very little the King could do to support his own cause so long as the Allies remained opposed or at best indifferent to him. The referendum went ahead, rigged though it was, and King Umberto II agreed to abide by the outcome, knowing it had been unfair, because he refused to see his already war-torn country thrown into conflict again. Today we can see very well the results of his exile and the downfall of the monarchy. Italy is deeply in debt thanks to a political class that buys votes (and are the most lavishly paid in Europe), the country is divided, an un-elected Prime Minister runs the government and a communist is President. HM King Vittorio Emanuele III had predicted that a republic would be the ruin of Italy and that only the communists would benefit from it. His foresight could not have been more accurate.
Posted by MadMonarchist at 3:09 PM