A World Without the Hapsburgs, Part III 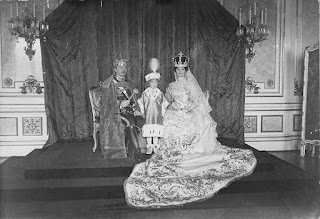 And what of the two primary partners of the Dual-Monarchy? In the case of Hungary, it is hard to imagine there being a more unjust outcome than the peace following the Great War as it affected the Hungarians. No other European power was as horribly butchered as Hungary who were certainly no more guilty than any other major participant in the war. When it was over, Hungary lost 70% of its territory and roughly a third of its entire population to the post-war carve-up. And all of this in spite of the fact that the Hungarian prime minister had tried to avoid the march to war in 1914. Istvan Tisza, Prime Minister of Hungary, was reluctant to the last to link the assassination in Bosnia with the Serbian government, only supporting the war once the ultimatum to Belgrade had been sent and the ties between the government and the “Black Hand” were concretely proven. He was worried (correctly as it turned out) that while troops were fighting the Russians and Serbs that Romania would enter the war and attack Hungary. He also opposed the planned-for annexation of a conquered Serbia even though this was quite popular with many military leaders in Vienna at the time. Painted as a villain after the war, even those who were most in agreement with the Allies ended up suffering along with the rest. 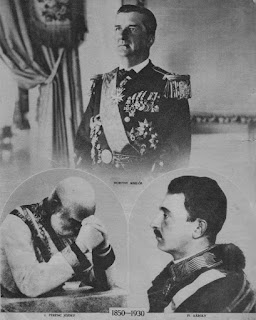 People starved, froze and leading republican traitors in Hungary enabled this by actually disbanding the Hungarian military. In the chaos that followed, the communist dictator Bela Kun seized power and was only overthrown by the humiliation of a Romanian army occupying Budapest. Brutal civil war raged between “red” and “white” factions and while a somewhat better state of affairs eventually prevailed the (entirely nominal) Kingdom of Hungary was left in such a weakened state that it had little choice but to stay on good terms with Nazi Germany, and Hungary did briefly regain some territory in World War II but it all ended with Hungary coming under Soviet occupation and being forced to submit to a communist dictatorship that was a puppet-state for Moscow. The Hungarian people were brutalized, the economy was in near absolute ruin and they had only decades of Soviet slavery to look forward to. Many tens of thousands of people were killed in the rebellions against communist rule before the collapse of the USSR finally brought an end to that era. There likely would have been even more conflicts, as seen in other areas, but Hungary had been left in such a weakened state that there was very little it could do as the people were brutalized by a succession of enemies.

Finally, there is the case of Austria itself. The Austrians, deprived of their empire, were naturally inclined, originally, to unite with Germany simply for the sake of security and economic recovery. The Allies refused to allow this and civil war, again, broke out between communist and non-communist forces with real stability only being restored by the establishment of the so-called “Austrofascist” regime of Engelbert Dollfuss. Ignore the labels, Dollfuss was a good man and a man who began setting the stage for the restoration of the Hapsburg monarchy and the wider world, certainly Europe, should be more aware of Dollfuss and inter-war Austrian history because it was the one, great opportunity for the European community to have stopped Hitler in his tracks. Because Dollfuss was a proud, Austrian patriot he was the number one enemy of the Austrian Nazi Party which wanted union with the “Third Reich” and the key moment came when the Nazis assassinated Dollfuss in 1934. Benito Mussolini, thoroughly outraged, ordered a partial mobilization and rushed Italian troops to the border, threatening war with Germany if Hitler took one step into Austria to take advantage of the situation. At that stage, Italy could have potentially defeated the Germans and Hitler backed off. 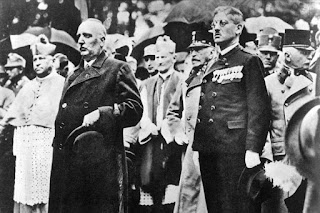 Unfortunately, the other Allied powers did nothing to support Italy during the crisis at a time when Hitler was militarily weak and diplomatically isolated without a single major power supporting him. But no action was taken and what Allied unity there was soon broke up over, of all things, Ethiopia. France and Britain imposed economic sanctions on Italy after Mussolini went to war with Ethiopia and so the Duce finally dropped all pretense of friendship with the Allies and accepted the outstretched hand of Germany. That sealed the fate of Austria and any possibility of stopping Hitler and Nazism when it would have been the least difficult. Schuschnigg, Dollfuss’ successor, secretly agreed to restore the monarchy within a year when Hitler decided to move against him, having obtained the assurance of Mussolini that he would do nothing to stop him. And it was in large part specifically to stop a return of the House of Hapsburg that Hitler moved on Austria because he was afraid that the restored monarchy would be a beacon for unity to neighboring countries and that Hungary and Czechoslovakia might reunite and therefore pose a threat to Nazi Germany (which was still far from her full military potential). 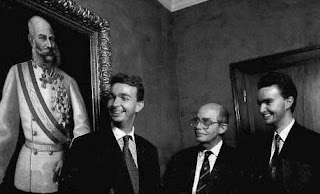 When the Nazis occupied and annexed Austria it really was a turning point in European history. Before that, Germany was weak and surrounded by unfriendly powers. Afterwards, the military build-up continued, Italy was an ally, German strength was brought to the frontiers of Yugoslavia and Hungary, intimidating them into taking a more cooperative stance with Germany, isolating Czechoslovakia and so on. When the Allies finally decided to draw the line at Poland it was against a much stronger Germany with a network of support and in support of a country they could do nothing to directly assist. If they had earlier drawn the line at Austria there might have been no war in Europe at all. Germany was still weak, isolated and Austria could have been supported by the Allies via northern Italy and Hitler would have, in all likelihood been either contained or defeated outright and possibly overthrown by elements inside Germany itself. Like other countries, Austria went through civil war, foreign war, devastation and occupation which were all directly traceable to the fall of the monarchy but, more so than in others, the misfortune of Austria was the misfortune of Europe and much of the world. It is no exaggeration, it is a fact backed up by the evidence of history that the fall of the House of Hapsburg was a disaster, both for her member states and for people all around the world.