The State of the Khmer Kingdom Today 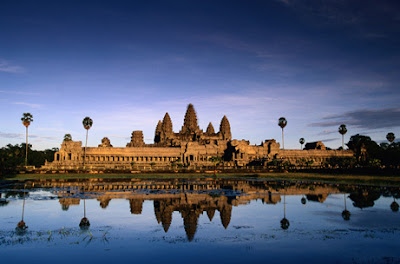 The often overlooked Kingdom of Cambodia was in the news recently as the pliant Supreme Court ruled to ban the primary opposition party in the country, clearing the way for the ruling Prime Minister Hun Sen of the Cambodian People's Party to sail to (another) easy victory in upcoming elections. I tend to think that many monarchists pay too little attention to Cambodia, thinking that since the monarchy was restored, the important job was done and we could move on. The truth, as usual, is not so simple and I am particularly sensitive to this case. I have personal ties to the Khmer kingdom that make it impossible for me to gloss over. I have family who were involved in the war there, both the U.S. and Vietnamese interventions, a Cambodian cousin (by marriage) and another cousin who moved there with her family last year. If you know what the situation is like 'on the ground' you will know that Cambodia is nothing like its official description as a run-of-the-mill "constitutional monarchy". It is effectively a socialist dictatorship using the monarchy for cover.

As usual, to understand the situation, one has to look back at the recent history of the Kingdom of Cambodia. Prior to World War II the country was effectively a colony as part of French Indochina. In 1941, thinking he would be easier to work with, the French authorities influenced the Crown Council to choose Norodom Sihanouk to succeed his grandfather as King. He remained in power during the Japanese occupation, declared independence from France at their prompting and essentially held power in the country ever since 1941 (he did abdicate for a time in favor of his father but still held control of the government during that time). He became extremely popular but as communist subversion increased in the country, King Norodom Sihanouk tried to play both sides of the fence between the French and later the Americans on one side and the communists, particularly China, on the other. Ultimately, anti-communist/anti-Vietnamese uprising resulted in the King being deposed in 1970 while he was out of the country and replaced by General Lon Nol. This caused King Sihanouk to do an 'about face' and urge his people to go to the jungle and join the communist Khmer Rouge.

When the U.S. pulled out of Indochina, the Khmer Rouge seized power in 1975 and enacted a puritanical, fanatical, communist makeover of the country with the King as their 'front man' on the world stage. This has led to some lasting controversy given that the Khmer Rouge butchered about a third of the entire population during their time in power. They were not removed until the ruling dictator, Pol Pot, insanely launched an attack on the neighboring Socialist Republic of Vietnam. He may have expected that his forces and China would crush the Vietnamese between them but he learned the hard way what the Americans, French and others, including the Chinese themselves, could have told him; fighting the Vietnamese is not something to take lightly. The Vietnamese basically wiped the floor with Pol Pot's forces, took over the country and installed their own government in 1979. One of the figures they put in power was a former Khmer Rouge cadre leader named (you guessed it) Hun Sen who had fled to Vietnam several years earlier. The Chinese did not approve of this, having backed the Khmer Rouge and because the Vietnamese were backed by Soviet Russia with whom China had a very tense relationship. However, King Sihanouk refused to go along with any pro-Khmer Rouge at this point, being glad to finally be free of them.

Under various titles, Hun Sen has effectively been dictator of Cambodia ever since the Vietnamese installed him after overthrowing Pol Pot. The UN finally got involved, held elections and the people voted to restore the monarchy so King Norodom Sihanouk was back but Hun Sen was going nowhere. He was forced to join in a nominal coalition government with the royalist party FUNCINPEC, an opposition party founded by the King and led by his second son Prince Norodom Ranariddh. It seemed like a basically normal constitutional monarchy from the outside but such appearances were deceiving. Hun Sen still had the strongest position and in 1997 carried out a coup against Prince Ranariddh when the Prince started to publicly complain about Hun Sen have more than half the power he was supposed to have. In the next elections, and practically every election in Cambodia has been deemed highly suspect, Hun Sen became sole Prime Minister and immediately began building up a cult of personality around himself as the "strong man" leader of Cambodia. King Norodom Sihanouk, who had more political experience than anyone, had his number from day one, famously referring to Hun Sen as the "one eyed lackey of the Vietnamese". However, Hun Sen still had opposition parties to deal with and the very revered King to at least hinder him if not stop him from doing whatever he wants.

The opposition parties were not terribly difficult to deal with. Hun Sen could always find an excuse to arrest opposition figures, suspend their rights or in some way make sure that his party came first in every subsequent election. A favorite tactic of his, used more than once, was to take advantage of the long-standing dispute between Thailand and Cambodia over the exact location of their border. Whenever an election was coming up, Hun Sen would send military forces to the border, the Thais would respond by sending their own troops to the border and this was used as justification for Hun Sen to declare a state of emergency and martial law, putting the army on the ground to make sure people voted for the CCP, and then backing off when the elections were over. The only one with the prestige to challenge Hun Sen was King Sihanouk who, while his actual powers were extremely limited, could be a major problem for the prime minister due to his widespread popularity. King Sihanouk could force Hun Sen to back down by threatening to abdicate and the King still had considerable support from China, though many Chinese communists wondered why they spent so much money on a foreigner and a monarch.

When King Sihanouk died, in Peking, in 2012 the largest obstacle to Hun Sen was removed. In my opinion, I think King Sihanouk wanted Prince Norodom Ranariddh to succeed him but, and again this is only my opinion, the Crown Council chose Norodom Sihamoni to be the next monarch. Prince Ranariddh had his problems, whether genuine or arranged by his enemies in the ruling party, who can say, but it seems to me that the Crown Council was influenced by Hun Sen to choose Prince Norodom Sihamoni because he wanted someone who would not pose a political threat to his hold on power and not be as difficult and opinionated as King Sihanouk had been. King Sihamoni seems a very nice man and all Cambodians should be loyal to him, however, it just seems to me that when your choice for king is a gay ballerina from France, you are probably choosing someone who does not fit the bill of a king likely to stand up to a dictatorial prime minister. The royalist opposition has been divided with Prince Ranariddh forming his own party for a time and it is anyone's guess if this was a legitimate internal dispute or not. Personally, I suspect the CCP of being involved in breaking up their biggest rival but I may just be paranoid. Anyway, the bottom line is that there is no longer a monarch with the experience, international support and local prestige to stand up to Hun Sen, the royalists have been troubled by scandal and division and now the primary opposition party has been banned and, it is no coincidence, just before national elections.

Cambodia still has ties to Communist China but the reality that people need to understand is that the country is a dictatorship under Hun Sen with a figurehead monarch. If you want to know who is really in control, it is not that difficult if you take a broad view and not get bogged down in the local political squabbles that often do not amount to munch (even the royalists have long been accused of being what Americans would call 'controlled opposition'). Remember that the communist Vietnamese "founding father" Ho Chi Minh had originally founded the Indochinese Communist Party and he expected and planned to become the communist dictator of all of what had been French Indochina, not just his native Vietnam. Keeping that in mind, recall that Laos is effectively under Vietnamese occupation to this day and that Hun Sen was first put in power in Cambodia by the Communist Vietnamese and has remained in power ever since. If you ever go to Cambodia you will also notice that the army officers all speak Vietnamese. That should be a huge, huge clue as to who is really in charge in Cambodia and who is pulling the strings of Prime Minister Hun Sen. The King is still there but Cambodia is still in need of a true royal restoration.
Posted by MadMonarchist at 9:43 PM