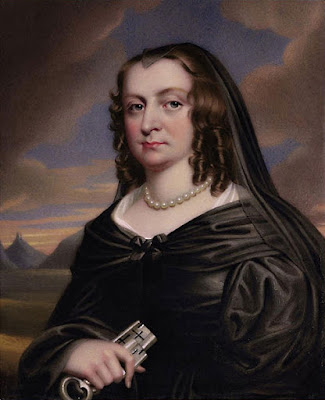 The English Civil Wars produced a great many heroic figures and one of my favorites is Mary Bankes though not all that many seem to know her story. This is, perhaps, not surprising as she rather goes against the preferred narrative of modern feminists in that Mrs. Bankes was a staunch royalist. She was born Mary Hawtry in Ruislip, Middlesex, England to Ralph Hawtry, Esquire of Ruislip and Mary Altham though exactly when I cannot say. August 8 is sometimes listed as the day of her birth but the date seems very unclear as I have seen accounts of her being born as early as 1598 to as late as 1605. In any event, her early years seem to have been blissfully uneventful. In or about 1618 she was married to Sir John Bankes who would go on to become the Lord Chief Justice of the Common Pleas and Attorney-General to King Charles I of Britain. He was obviously a successful man with a fine legal career and in 1635 he purchased Corfe Castle in Dorset, with all attending manorial rights and obligations, from Lady Elizabeth Coke.

Lady Mary was also quite successful at her task of wife and mother, giving Sir John ten children, six daughters and four sons (Ralph, Jerome, Charles, William, Alice, Jane, Mary, Joanna, Elizabeth and Arabella). However, their domestic happiness was cut short thanks to the antics of the Parliamentarians. In 1643 Sir John Bankes was called away by the King to take up arms against the enemies of the Crown at London and Oxford and so he departed, leaving Corfe Castle in the charge of his wife with their children, household staff and five fighting men for security. This would prove crucial as Corfe Castle was at the time the only armed royalist castle an the coast of Dorsetshire, having four cannons on its walls. The importance of the castle did not escape the notice of the rebel Roundheads (Parliamentarians) and not long after Sir John left about 40 Roundhead sailors appeared and demanded that the artillery be turned over to them. Well, Lady Mary was having none of that and promptly had her maids and the five men put the cannon in action and frighten the rebels away with a few shots.

That act of defiance showed what Lady Mary Bankes was made of but she also knew that it was a momentary victory and that the real importance of her position was the castle itself rather than the cannon. The enemy had retreated but were not far away and so she did, ultimately, decide to hand the guns over so that she could gather supplies which would enable her tiny household army to withstand a siege. This was very good planning indeed as not long after, in June of 1643, more Roundheads appeared, this time about 600 of them and laid siege to the castle. This went on for more than a month when the rebels began to feel rather silly being held at bay by a handful of men and some women and children so they began to attack the castle. Once again, Lady Mary, with her household, held off these trespassers by pelting them with stones and fiery embers from the castle walls until, after losing over a hundred men killed or wounded in August, the Roundheads conceded the victory to Lady Mary and pulled back.

It helped that a sizeable force of royalists was in the neighborhood as well and these came to call on the castle with Sir John even able to visit his wife and children briefly. A few more soldiers were left behind, bringing the total number of defenders up to 80 at most, but soon the situation shifted back to the way it had been before. The castle was still too important to abandon entirely and the rebel forces returned but remained at a distance. This second siege continued and continued for years. For Lady Mary, this was her darkest hour and at the end of 1644 her husband Sir John died at the age of 55, making her son Sir Ralph Bankes and the new lord of the manor. In spite of this heartache, Mary remained just as tenacious as ever and refused to surrender her fortress to the enemies of the King even as another year and another passed by. 1645 came and went and Corfe Castle still stood defiant, defended by Mary Bankes and her gallant little band. The enemy, perhaps remembering the more than a hundred casualties they had suffered trying to storm the place, simply remained at a safe distance to wait their enemy out.

The time for waiting finally ended in 1646. That year a young royalist officer, named Colonel Cromwell no less, managed to slip inside the castle with a small group of soldiers to offer Lady Mary the chance to escape. She was grateful for any help of course but refused to abandon her home to the enemy and, after all, she had been holding them off well enough for the past few years. However, this second siege would not go on for much longer, though, among her tiny force of children and scullery maids, it was one of the men of the small group of actual soldiers present who was to doom her little outpost. One of the men with her in the castle, one Lt. Colonel Thomas Pittman, slipped outside the castle walls to the enemy camp and offered to betray his King in exchange for his own safety. He persuaded the garrison commander, Colonel Henry Anketell to go to Somerset for reinforcements but the troops that came were Roundheads with their coats turned inside out. About half made it inside before Anketell suspected something and shut the small sally gate. Unfortunately, enough made it inside to secure key positions and hold them until morning when they were joined by a major Parliamentarian attack.

Lady Mary Bankes, with most of her home overrun by the enemy, finally had no choice but to agree to surrender. Although, she did not do so until having her maids and children throw all the family silverware down a well so that it could not be melted down and used to fund the Parliamentarian cause. She was defiant to the very end. However, even the Roundheads were so impressed by her tenacity in holding off such superior forces for so long that they allowed her to keep the keys to the castle as a mark of respect. Not wishing to ever endure such an ordeal again, the Parliament ordered the castle demolished immediately. Lady Mary, for her part, retired to Eastcourt manor, purchased by her sons Sir Ralph and Jerome and remained there until her death on April 11, 1661. She was an extraordinary woman who earned an honored place in the pages of history for her steadfast and determined defense of her home for the sake of King and Country. Had King Charles I been blessed with a few more people with the courage and tenacity of Mary Bankes, he might just have won the war.
Posted by MadMonarchist at 4:49 AM