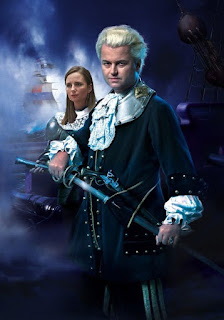 It is election time in The Netherlands and the one political figure who has been getting the most attention, and the most criticism, from the media is certainly Geert Wilders, leader of the Party for Freedom (PVV). Despite having otherwise very liberal views, Wilders has been described as a "far-right" populist by the media as well as the "Dutch Donald Trump" for his desire to stop Muslim immigration into the Netherlands and to take the Dutch kingdom out of the European Union. Of course, any look at his political and social views, or the domestic policy of French presidential candidate Marine Le Pen, will show that these are certainly not "right wing" or "far right" figures at all. However, as they both stand opposed to open borders and in favor of national sovereignty, that is all it takes these days to be considered a right-wing extremist. For myself, I have never been wild about Wilders but would not hesitate to vote for him in this election were I eligible to do so. Aside from his social views, with which I am not in agreement, there is the issue of the monarchy and Geert Wilders is certainly not a member of what was once called the 'Orange Party'. He is certainly no Jacobin firebrand and would probably rate as more royalist than his French, female counterpart but an ardent royalist I would say he is certainly not. He relationship with the House of Orange has troubled me for years.

Not all of this, to be fair, is his own fault, depending on how you look at it. The monarchy in The Netherlands is supposed to be non-political and non-partisan, however, no one usually minds if the royals express opinions as long as they are in line with the liberal mainstream. Talking about "values" is fine but, in an era in which values are legislated by the government, nothing is non-political these days. In her 2007 Christmas speech HM Queen Beatrix made some remarks that most, including Wilders, took as a very thinly veiled swipe at him and his party, praising multiculturalism and criticizing opposition to it. From that time on, Wilders made no secret of the fact that he has little to do with Queen Beatrix (Princess Beatrix since her abdication) and has called for the monarchy to be removed from having any political power and become purely ceremonial. This, of course, is a major problem for me but I do not believe Wilders would have taken the position he had were it not for the Queen coming out in opposition to him and his party first. Still, I have no doubt the situation persists as I doubt the views of King Willem-Alexander are very different from those of his mother or anyone else in the circles they move in.

This, under ordinary circumstances, would be enough for me to never consider supporting Wilders at all but, alas, these are not ordinary circumstances. In the first place, Wilders takes no official position on the monarchy and has never become a republican. It would be a difficult thing to do given that the PVV, while having a larger percentage of republicans than most, is still a party with a large majority of its membership being royalists. If for no other reason that the facts on the ground and realpolitik, I could not imagine Wilders ever trying to abolish the monarchy provided the King broke every precedent and openly tried to suppress him which, likewise, I could never imagine happening. So, as far as the monarchy goes, there is reason for me to dislike him but not enough to consider him untouchable or to outweigh other factors.

Those other factors are also very important to me and, it seems, to a growing number of Dutch voters as well. This is reassuring since, as his support increases, so does the amount of royalist support for Wilders and that will help check his dislike of the current members of the House of Orange. I fully support Wilders in wishing to save the Netherlands for the Netherlanders because a Netherlands without Netherlanders would be no Netherlands for me. I also fully support his aim to take the Netherlands out of the European Union. This also helps me swallow my disdain at his call for a purely ceremonial monarchy since, in my opinion, as long as any monarchy is part of the EU, the monarchy is basically ceremonial anyway as the Sovereign is not truly sovereign. I also think that the Dutch monarchy and all the rest that makes up the Dutch culture and national character can only be preserved by the Dutch themselves and not by Moroccans, Algerians or Turks. Net migration for the first half of 2016 alone was double what it had been the previous year. This is unprecedented. For me, the burqa is just as out of place in Amsterdam as a miniskirt would be in Riyadh. I want the Dutch monarchy to survive but I also want there to be a Dutch population for it to reign over. So, not without some reservations, I would be voting for Wilders and the PVV were I able because, for me, populations are not interchangeable and the Dutch people are not replaceable. Also, because I do not think anything will get better, from my reactionary point of view, until the tyrannical, top-heavy, talking shop called the European Union is consigned to the dustbin of history.