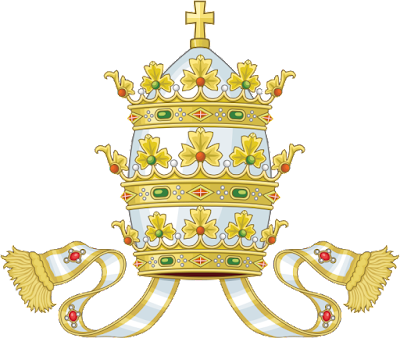 The Roman Pontiffs, because their spiritual position is of greater importance than their political position (though sometimes it hasn’t seemed that way) have never had the sort of accoutrements than secular royals have had, these typically being a sword, a scepter and a crown, at least in western, Christian countries. However, there have still been some items of personal adornment that have distinguished the Bishops of Rome such as the “Fisherman’s Ring” (which is unique to each Pontiff), the red shoes and, most strikingly, the three-tiered crown or Papal Tiara. The oldest sort of unique papal ceremonial headgear dates back to the Dark Ages but there soon developed a sort of crown, originally a bullet or beehive-shaped object with a crown at the base. Later, a second crown was added and, in time, a third which became the traditional norm for hundreds of years. Popes would wear their crown at their coronation, of course, and certain other formal events but, it should be noted, were never liturgical wear other than on one occasion when Pope St. John XXIII wore his tiara at a special joint Catholic-Orthodox service.

The three crowns on the Papal Tiara can symbolize a number of things, from the triple Christian roles of prophet, priest and king to the Church militant, Church suffering and Church triumphant to the supreme authoritative position of the Pontiff as, “the ruler of the rulers of the world”, a phrase which was formerly used at the papal coronations. Most of the Papal Tiaras were destroyed when the French Revolution came to Italy but a new collection was begun as popes were often donated a Tiara from their home diocese. When Pope Bl. Pius IX lost his political position as ruler of central Italy, Catholic countries seemed to try to compensate for failing to go to war to defend his property by showing how much they still respected his spiritual authority by gifting him a Papal Tiara. He ultimately collected six Papal Tiaras, the most of any Pontiff. For a time, it became tradition to use the 1877 “Palatine Tiara” of Pope Bl. Pius IX at papal coronations. All of his successors were crowned with this Papal Tiara until the coronation of Pope Bl. Paul VI.

Pope Bl. Paul VI was crowned with a very distinctive tiara made for him by his former archdiocese of Milan. However, his would be the last papal coronation to date as, at the end of the Second Vatican Council, Bl. Paul VI gave up his Papal Tiara as a gesture of humility, selling it to benefit the poor. It was bought by the Catholic Church in America and is currently on display in Washington DC at the Basilica of the National Shrine of the Immaculate Conception. This was the last Papal Tiara to ever be worn or, at least, the last to ever be worn publicly (who knows what the Popes try on for size behind the walls of the Vatican). However, old traditions do not ordinarily stop so suddenly and, other than the short-lived Pope John Paul I, every one of the Pontiffs since Pope Bl. Paul VI have still been given a Papal Tiara of their own from some group or another. Obviously, though it remains only as a symbol on the Vatican City coat-of-arms, the Papal Tiara is still the one symbol most associated with the papacy.

When elected to the throne of St Peter, Pope St John Paul II remarked on his immediate predecessor not having a coronation. He lamented that the Papal Tiara had come to be viewed in an incorrect way, yet, he made no effort to correct this other than pointing it out on this one occasion. In the same remarks he said that he too would not be having a coronation to mark his installation as Supreme Pontiff. While Pope Paul VI had done away with much of the traditional pomp and ceremony of the papal court, the reign of St. John Paul II saw occasional use of traditional finery but an explosion of extremely novel modes of dress for a Pope. It seemed to be the era of tie-dye vestments. However, though it remained unknown until long after his passing, Pope St. John Paul II did have a Papal Tiara of his own. It was made by unknown persons behind the “Iron Curtain” in Hungary and was smuggled out of the land of the Magyars to Rome. Although simple in style, it is still quite striking. The lack of lappets (representing the Old and New Testaments and traditionally featured on all bishops miters and Papal Tiaras) suggest it may have been made solely as an artistic work and was not intended to be worn at all. Who was responsible for its construction remains a mystery (as far as I know) and photos of it only emerged after the collapse of the Communist regimes in Eastern Europe. Whatever faithful Hungarians were responsible, I say God bless them for helping to carry on the tradition of every pope having a crown of his own.

With the death of St. John Paul II and the election of Pope Benedict XVI the era of the tie-dye papacy had certainly come to an end. Benedict XVI took a noticeably more traditional style in his dress and habits, however, unfortunately, that did not extend to the Papal Tiara. Benedict XVI reportedly inquired about having a coronation but was told that it would take too long to organize and come up with a proper ceremony on such short notice so that, effectively, it could not be done. I have no way of verifying that story, just relating what I heard but it seems like a lame excuse. Pope Benedict instead opted for a larger, more old-fashioned style of pallium (the wool band worn about the shoulders by popes and metropolitan archbishops) to be invested with at his inauguration, though it was later replaced with one more like those others wear but still slightly distinctive. However, the Papal Tiara was not only used but even removed from the papal coat-of-arms, replaced with an odd looking miter sporting three, connected, gold bands around it. This was designed by Deacon (now Cardinal) Andrea Cordero Lanza di Montezemolo. Pope Benedict XVI was not to end his reign without a tiara of his own though. In 2011, after a General Audience, Pope Benedict XVI was presented with a Papal Tiara by a group of German Catholics with a businessman named Dieter Philippi being behind the project, having employed a Bulgarian firm that makes liturgical headgear for the East Orthodox which makes it more likely than not that this Papal Tiara can actually be worn. Unfortunately, it was not, despite Benedict XVI being known for trying on all sorts of hats and reviving other forms of papal headgear, specifically the camauro, not seen since the days of Pope St John XXIII (though he did only wear it once).

The election of Pope Francis brought about a drastic change from the more traditional style of his predecessor. From the first day of his election, Pope Francis dispensed with traditional papal fashions along with other displays to highlight his humility in contrast to his predecessors such as refusing to live in the papal apartments at the Apostolic Palace and wearing black or brown shoes rather than the traditional red shoes meant to symbolize martyrdom. With the new standard for humility and simplicity set by Pope Francis, papal coronations seem firmly consigned to the history books and, needless to say, the Papal Tiara has remained absent from the papal coat of arms as well. Whether it was his decision to live in the equivalent of the Vatican ‘guest house’ to his preference for a compact car over the dreadfully named “Popemobile” much less the stately Sedia Gestatoria, Pope Francis has been known for his public displays of humility and renunciation of traditional finery. One would think that he would be the last Roman Pontiff who would wish to receive a Papal Tiara of his own, yet, he too has one. In 2016 Pope Francis was presented with a Papal Tiara by the President of the Assembly of the Republic of Macedonia. It was handmade for him by the nuns of the monastery of Rajcica of Ohrid pearls from a nearby lake. It is quite an exquisite Papal Tiara, obviously made with great care. Pope Francis has never worn it nor would any expect him too. In fact, it was stated at the time that those giving the gift are well aware that Papal Tiaras have become a thing of the past and obviously did not expect their gift to ever be used.

The papacy has, in a very short time, outpaced even the progressive constitutional monarchies of liberal Europe in not only ceasing to have coronations but going so far as to remove their crowns from even symbolic use. Any pope could at any time choose to revive the old traditions, as the pope can generally do as he pleases and is not bound by the actions or words of his predecessors, but the way in which it was done makes this highly unlikely and unfortunately so in my opinion. Pope St John Paul II lamented that the Papal Tiara was, “…an object considered, wrongly, to be a symbol of the temporal power of the Popes” but nonetheless refrained from the use of one and, in that same remark at least seemed to imply that a clash with the virtue of humility was the reason. The portrayal of the abandonment of the Papal Tiara by Pope Paul VI as a symbol of the ‘renunciation of earthly glory’ thus set a standard that it would be very hard for a future Roman Pontiff to undo. By abandoning the Papal Tiara as a gesture of humility, how can any future Pope return to it without appearing vainglorious? It may be hard enough simply to move back in to the Apostolic Palace after the reign of Pope Francis without appearing to show vanity. And that, I think, underscores a more fundamental point about why the renunciation of the Papal Tiara was a mistake. In attempting to show that such “appearances” do not matter, they have, on the contrary, shown the extent to which “appearance” is all that matters.
Posted by MadMonarchist at 2:43 PM