The Crisis in Germany 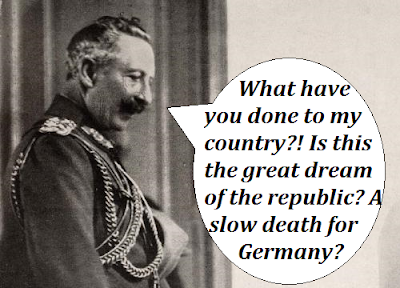 That Germany is in the midst of a crisis is beyond dispute. The same could be said for most of western Europe but Germany would seem to be "ground zero" for this particular disaster. What is going on is absolutely astounding. Mass attacks on women, child rape, repeated terrorist attacks and yet the government of the Bundesrepublik remains committed to the lie that nothing is wrong, nothing must be changed, just carry on 'business as usual'. Only, if you are a woman, you might not want to go out alone if its late and you might want to dress more conservatively. Don't do anything that might offend the new arrivals, don't send the wrong message and certainly do not do anything to make them mad because while at the same time the government assures everyone that these people are perfectly innocent and peaceful, they also want everyone to walk around on eggshells for fear that the slightest offense could prompt them to an act of mass murder. Again, it's just astounding. And it is astounding that *anyone* in Germany is willing to tolerate this situation. There are those who do not of course, but they are still overpowered by those who do or, at least, those who are too afraid not to. Is there a solution to this crisis? Can anything be done?

As I wrote several years ago in The Case for Monarchy: Germany, the restoration of the monarchy would be at least a big part of the answer. Now, I realize many will (as they have done before) accuse me of being a hammer who sees every problem as a nail, but I really can come up with no other option that would save the German people from the demographic drowning their republican leaders have subjected them to. The Germans must, absolutely *must* get out from under the shadow of Nazi Germany and World War II. That is positively never going to happen in the current system because the current republic only exists because of Nazi Germany. Let me be perfectly blunt about this: the Federal Republic of Germany is not a government or a country or a nation, it is essentially a political apology. It exists only to serve as a vehicle for guilt, shame and to continuously milk the German people like they were no more than cattle in order to give money and resources to non-Germans. Patriotism is considered evil, national pride is evil, even considering the German people worthy of survival is now being considered evil. You shouldn't have to know as many mental health experts as I have to know this is not a healthy mindset for a people and is, in fact, quite dangerous. If you don't care about the suicide of the German nation, you should, because sometimes suicides take others with them when they go. 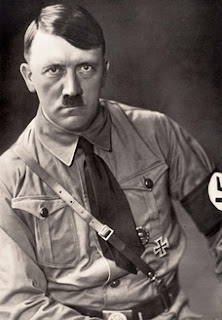 What do I mean by that? I mean that people are being pushed into a corner where they are going to wonder who, who in all of Germany's existence, ever put the Germans first, and they're going to see nothing but the scowling face of Hitler looking back at them. It isn't true of course, but it certainly seems that way due to the unnatural fascination with the man. He haunts Germany and he won't go away because his memory is far too useful as a way of shaming people into submission. And, of course, his handful of modern-day admirers don't mind at all either for it makes them seem to be the only alternative, as if modern Germany is simply seething with National Socialism just below the surface. When a regime that is in the process of destroying its own population says that Hitler is still 'Public Enemy #1' that can only help Hitler's public perception. Moreover, the Federal Republic is repeating almost all of the mistakes of the Weimar Republic that led to the Nazis taking power. Communists can agitate all they like but Nazis are arrested. Speak out against any group you like, except for the Jews, that can land you in jail. Celebrate perversity, ruin the traditional family, there are so many things Germany is doing today that it did in the 1920's that it is almost frightening. And, on top of it all, as long as Hitler remains the ultimate bogeyman, the elites are, in so many words, constantly telling the people that their only choice is them or the Nazis and when "them" means no more Germans in Germany, the Nazi's won't seem so bad.

This circular pattern must be broken! Another alternative must be put forward and that can only happen by the Germans being reconnected with their traditional, pre-1918 past. Not a past of guilt and shame but a past they can take pride in, a past that is pro-German and not anti-anyone else. There is plenty there to work with and would not require anything all that radical to accomplish. Again, I am not trying to be so partisan about this, but I see no other solution. The Weimar Republic existed as a vehicle for reparations for World War I and was doomed to fail. That failure manifested itself with the rise of National Socialism as a reaction to this and the same thing will happen again in reaction to the vehicle for the World War II guilt cudgel that is the current republic. A healthy national pride can only be achieved by embracing the totality of German history, the organic development of Germany as manifested in the First German Empire, the German Confederation that replaced it at the Congress of Vienna and finally the Second German Empire. That second empire, as we know, came together through the German princes which would be extremely difficult at this point but the example of the German Confederation would be a workable model that could, I think, be easily modified for current circumstances.

The symbolism is at hand already. The black-red-gold flag was, originally, the flag of the German Confederation, basically by taking the black and gold colors of Imperial Austria and adding a red stripe as a nod to Brandenburg, the electorate held by the kings of Prussia. A new confederation of German states for German people is something that could be done without princely leadership as the German princes are understandably gun-shy about having anything at all to do with politics, other than the Hapsburgs who I am not sure would be on-board with such a notion anyway. However, while I would be happy to see Austria included, I would also be just as pleased to see Austria take the lead in their own direction and work on a revival of the model of Blessed Emperor Charles for a "United States of Greater Austria" across the old Hapsburg lands. A place for every people and every people in their place. Either way, turning away from the current system is no longer only preferable but vital for the survival of the Germans as a people.

All of this can be accomplished if the Germans can get back in touch with their ancient roots. The Germans have a long and glorious history of great kings, great thinkers, great saints and great artists. It only serves the interests of those in power now to pretend as though nothing of German history can be seen beyond the concentration camps. I am certain that every German today, whether they like it or not, knows who Adolf Hitler is. I doubt every German today knows who Otto the Great or Friedrich Barbarossa was -and that is scandalous. That is intentional. That must change and change quickly or the Germans will not survive. And for those whose mindless hatred might make them think that would be no great loss, be forewarned that the death throes of the German people could leave quite a lot of devastation behind. Western European nations have displayed something of a habit of this, be it the French in regards to the British or the British in regards to the Germans themselves, that once their blood is thoroughly up they will willingly rush headlong into ruin so long as they can take their enemy down with them. That wouldn't be pretty and no rational person should ever want such a thing to happen. Let us take care that it does not.
Posted by MadMonarchist at 3:06 AM