Abdullah ibn Abdulaziz, King of Saudi Arabia passed away after a bout of pneumonia today (January 23 local time). He will be succeeded by his half-brother Crown Prince Salman bin Abdulaziz al Saud. Politicians, diplomats and economic watchdogs have been on edge for quite some time as the elderly King of Saudi Arabia deteriorated in health. What direction would Saudi Arabia take under new leadership? Will the kingdom move to the right or the left? Will clerical hardliners have more influence or less? All are questions which reveal how central Saudi Arabia is to the Middle East region. ISIS still controls much of Iraq, a civil war continues to rage in Syria and there has just been a coup in Yemen, a country where, in the past, Saudi Arabia supported royalist forces in a previous civil war. With all of these things happening, it is a bad time for King Abdullah to exit this life as he was, on the whole, a more beneficial leader for the region than would likely otherwise be the case. 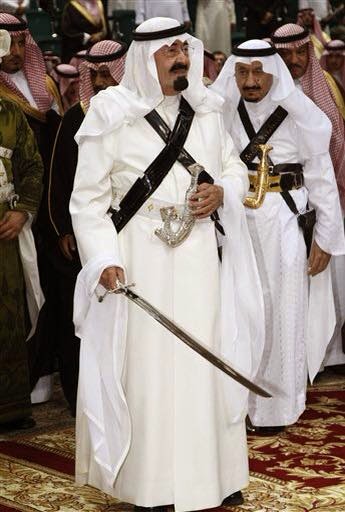 I have said before, as a pan-monarchist, Saudi Arabia is not one of my favorites. There is much to be critical of there. Personally, I don't like the whole way the country came into being and would have taken a Hashemite over a Saud. However, I have also always said that I support the Saudi monarchy, distasteful as many find it, because the alternative would be worse -not better. He has been more "progressive" (for lack of a better word) than I think many people realize. Under his leadership, as we have mentioned on this weblog over the years, the power of clerics to declare fatwas was restricted, the first woman was appointed to a government ministry-level position and there was a measure of very limited democracy introduced on a very low level. It was nothing revolutionary or earth-shattering as such a thing would have simply caused instability and probably civil war but nonetheless it is an undeniable fact that under King Abdullah, Saudi Arabia was inching closer to the norms of the rest of the world and away from the values of the hard-line religious radicals. It remains to be seen whether these policies will continue under Salman but it seems likely.

Of course, there are many who will say that King Abdullah did not go far enough. That may be but I really have no interest in what the laws in Saudi Arabia are. That is their own business and not mine and if their punishments are harsh and their freedoms few, it really doesn't concern me at all. What is an issue is the well established fact that many in Saudi Arabia have exported a radical brand of Islam abroad that has inspired terrorists to attack numerous countries. That is something I cannot overlook and a major reason why I could never have a totally favorable view of Saudi Arabia. However, we must also keep in mind that even Saudi terrorists, and none were more prominent than the late Usama bin Laden, hated the Saudi monarchy as well and wanted to overthrow it because it was "too friendly" to the west. The point is that liberal, progressive secularists do not exactly have a large following in a country like Saudi Arabia and if the House of Saud were overthrown tomorrow, what replaces them would most likely be a theocracy on steroids that would make the Ayatollah in Iran seem like a pussycat. That reason alone would be enough to make me wish the House of Saud well through this time of sorrow and transition from one king to the next.
Posted by MadMonarchist at 6:39 PM