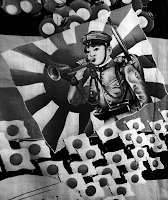 Yes, there is a word of warning this time. During next week, probably Tuesday if I can remember to, the images page will be refreshed again and this time, since the news has kept it mind lately, the subject will be the Emperors of Japan, the "Land of the Rising Sun" and the oldest monarchy still reigning in the world today. Today, as in the past, it seems to me that Japan is often treated unfairly, condemned for doing what other nations have done (by those nations themselves often enough) and today being criticized for past misdeeds by Communist China whose misdeeds are far, far greater than anything Japan has ever even been accused of doing. I don't know of any other country that has changed so radically (twice) in such a short time as Japan without the horror of a revolution and through it all it has been the emperors who have kept everyone calm, confident and devoted to excellence for their country while maintaining the best of Japanese culture.
Posted by MadMonarchist at 3:52 PM