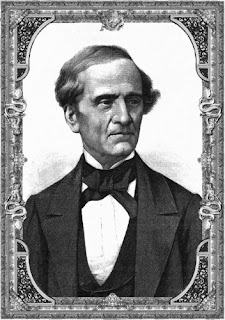 Jose Maria Gutierrez de Estrada was probably the most prominent Mexican monarchist of the era after the establishment of the republic who was never a military commander. His position was entirely a diplomatic one and yet few if any other Mexican did more to bring about the reestablishment of monarchy in Mexico under the doomed Hapsburg Archduke Maximilian. He was born in 1800 in San Francisco de Campeche in the Captaincy General of Yucatan. Coming from a well-to-do family he was sent to Mexico City for the best possible education and though few today might realize it, in the Spanish colonial period, New Spain (mostly modern day Mexico) was by far the most well established educational center in North America. As a young man he lived through all of the traumatic events that ultimately led to the independence of Mexico in 1821, the short lived empire of Iturbide and finally the establishment of the republic under President Guadalupe Victoria. By that time his intelligence gained him some notice and he was dispatched by the President on the first Mexican diplomatic mission to Europe which was led by Don Lucas Alaman (another noted Mexican monarchist) to establish friendly relations, first with the Kingdom of the Netherlands.


However, Gutierrez’ early diplomatic work was cut short by poor health that would plague him throughout his life and he had to take some time off to recover. During that interval he married, well -as was expected, to the sister of the Conde de la Cortina. In 1831 he was elected Senator for his home state of Yucatan on the centralist party ticket. At the time, republican politics were divided into two camps; the federalists who wanted greater autonomy for the states and centralists who wanted a stronger central government in Mexico City. This was a bitter struggle which in many cases led to civil war and was at least partly responsible for the short but costly war that saw Mexico lose Texas in 1836. However, Gutierrez managed to survive it all with his reputation intact, gaining fame as a writer and making many friends in high places in Mexico City. Like many conservatives he allied, for a time, with General-turned-President Antonio Lopez de Santa Anna who appointed him Secretary of the Interior in 1835; the highest political office he would achieve in his career. In did not last long though as that same year Santa Anna set off to personally crush the rebellion in Texas where he went down to defeat, capture and exile.

Like many, all of this had an impact on the worldview of Gutierrez de Estrada. The United States was expanding and growing more powerful. Gutierrez advised strengthening Mexico’s position by becoming more closely allied with the nations of Europe and Central America. However, no long-term policy was ever possible because of the chronic instability in Mexico City. No government could ever get much done since, no sooner had one strongman gained the presidency than he was overthrown by another and so on and so on in seemingly endless succession. Gutierrez felt this particularly when he was sent as ambassador to Great Britain to prevent the British from recognizing the Republic of Texas and to oppose American annexation of Texas (the event which ultimately sparked the disastrous Mexican-American War). However, Gutierrez was unable to get anywhere in this mission because he had barely arrived in Britain when the government that sent him was overthrown and replaced by another. The conservative President Anastasio Bustamante offered him the position of Foreign Minister but Gutierrez turned it down, being thoroughly disgusted with the state of affairs in Mexico and convinced that only a firmly established monarchy could save his country from the chaos of republicanism.

Gutierrez made no secret of his opinion that monarchy was the answer for the ills of Mexico and this made him a primary target of republicans and the liberal party. He was forced to leave the country in 1842 but had at least for a time the backing of the government of Generalissimo Santa Anna which charged him with inquiring amongst the courts of Europe about importing a prince to restore the monarchy in Mexico. This Gutierrez did with zeal. He wrote constant letters to anyone and everyone about how republicanism had brought anarchy that was stagnating all progress in Mexico, how bandits ruled the countryside while the powerful fought over the presidency and how the rising liberal party was despoiling the Church. He met with Prince Metternich in Austria and King Louis Philippe in France, both of whom expressed some interest in his plan but took no action. The revolutions of 1848 also proved to be a major problem as every royal house in Europe was forced to look to their own survival and forget any idea of overseas adventures. Nonetheless, Gutierrez was nothing if not persistent. He joined forces with other monarchist expatriates such as Jose Hidalgo in making the case, but none were as passionate as Gutierrez who sometimes put people off with his emotional intensity. Hidalgo may have been the most charming but Gutierrez was doubtlessly the most zealous.

He had, during his many years of exile lobbying, suggested numerous princes for the Mexican throne, one of them being the Archduke Ferdinand Maximilian. When the French Emperor Napoleon III finally came around to the idea, he enlisted Gutierrez in persuading the young Hapsburg to accept the Mexican Crown. This Gutierrez did with his usual determination, pleading, promising and impressing upon the Archduke that he was the only man who could save Mexico from total ruin and disaster. With the victory of the liberal party in Mexico Gutierrez was joined by other Mexican monarchists such as the venerable General Juan Almonte who joined in the chorus. When Maximilian at last let it be known that he would consent it was Jose Maria Gutierrez de Estrada that spoke for the Mexican delegation that came to Miramar to formally offer him the throne. His words were intense and powerful:

“Prince: The powerful hand of a generous monarch [referring to Napoleon III] had hardly restored liberty to the Mexican nation, when he dispatched us to Your Imperial Highness … Without you, Prince -believe it from these lips which have never yet served the purpose of flattery- without you, all our efforts to save the country will be in vain … May it please Your Imperial Highness to fulfill our prayers and accept our choice. May we be enabled to carry the joyous tidings to a country awaiting them in longing anxiety.

“These are the sentiments which in the name of our grateful country we lay at the feet of Your Imperial Highness. We offer them to the worthy scion of that powerful dynasty which planted Christianity on our native soil. On that soil, Prince, we hope to see you fulfill a high task, to mature the choicest fruits of culture, which are order and true liberty. The task us great, but greater is our confidence in Providence.”


﻿
As we know, Maximilian said he would accept if a referendum showed that the Mexican people truly desired him and this the French forces quickly organized. Once that was done Gutierrez again led the formal delegation in offering Maximilian the crown, which he finally accepted. Gutierrez was the first to drop to his knees, take the hand of the Archduke and shout, “God save His Majesty Maximilian I! God save Her Majesty Charlotte, Empress of Mexico!” The others quickly joined in the cheer. On their way to Mexico the Imperial couple stopped in at Rome to call on Pope Pius IX and stayed at the palace which was Gutierrez’ home in exile. When the Pontiff returned the visit Gutierrez had tears running down his face as Pius IX stepped inside his home. The loyal Mexican did not accompany his new sovereign back to his homeland, saying that with the establishment of the monarchy the great work of his life was accomplished and that he wished to retire.

Emperor Maximilian still named him as his personal representative to the courts of Europe. However, the ever more reactionary Gutierrez was sometimes disturbed by the news that reached him from Mexico. Like many in the staunchly conservative camp, he was inclined to believe that Maximilian was being far too soft on his republican enemies and did not go far enough in restoring the preeminent position of the Catholic Church in Mexico. Nonetheless, he was confident that he had done all he could do and that the future of Mexico would be brighter for his many years of effort. Because of that it is, perhaps, fortunate that he did not live to see the monarchy he worked so hard to restore come crashing down. Jose Maria Gutierrez de Estrada passed away in Paris in 1867, shortly become the Second Mexican Empire came to an end and Emperor Maximilian met his own tragic fate.
Posted by MadMonarchist at 12:17 AM