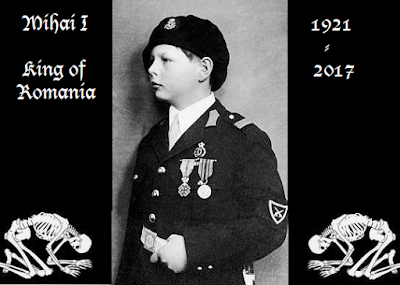 As most of you have probably heard, His Majesty Michael I, the last King of Romania, died yesterday in Switzerland at the age of 96. A sad day, to be sure, for the House of Hohenzollern-Sigmaringen, for all loyal Romanians and for monarchists everywhere. He was a good man and those interested can find out more at the links below about his life and the part he played in Romanian national life at a critical time for the world. When it comes to monarchs in general, what they represent is always far greater than the individual and their own virtues or flaws; so it is with the death of kings as well. King Michael I represented a great hope for a return to traditional authority in Romania or, at least, a hope for the future by providing a 'foot in the door'. Perhaps it is the emotion of the occasion but I cannot be as optimistic as I was before about a royal restoration of some sort in Romania now that the last king has gone to join his ancestors. There were brief occasions when it seemed a very real possibility, all of them missed opportunities but as long as he lived I thought there was a better chance than their could ever be without him. 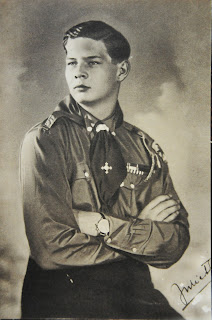 King Michael I had lived long enough to see the collapse of the communist regime that forced him from his throne and into exile. He was able to return home, gain some official recognition from the existing (usurper) government and even undertook efforts on their behalf as a sort of unofficial ambassador-at-large for his country. Because of his actions in World War II, he was highly respected even among many who are not and would never think of themselves as monarchists. For that reason, I had long hoped that he might be able to be restored, at least as a ceremonial, constitutional monarch, as a sort of symbolic tribute to an elderly man who had lost everything for standing up to the communist oppressors. I could have seen a republican government doing that, seeing it, as they would, as a rather empty gesture of no real importance but one which would, nonetheless, restore the monarchy on an official basis and provide a place from which to advance farther toward a state of affairs more acceptable to Romanian monarchists. As the King entered extreme old age, I thought it unlikely but not beyond the realm of possibility that something might be negotiated to correct the past wrong and restore him to his throne before his death. Alas, it was not to be and I fear things will be much more difficult for Romanian monarchists going forward.

It must also be said that King Michael himself, the Royal Family and monarchists (not unusually unfortunately) also sometimes got in their own way. Changes to the succession, involvement in politics and other issues were not helpful. I am not as critical as I might be as changing the rules of succession for non-reigning dynasties has always been a difficult issue and the political situation is an impossibly fine line to walk. Stay aloof and you have nothing concrete to offer, get involved and you are seen as partisan and a source of division rather than unity. It is certainly a difficult situation. Hopefully, the next generation will carry on and will achieve success but without King Michael and his remarkable life story I think it will be much harder for them. 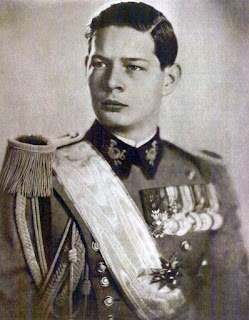 For more about the life of the late King:

The Story of the Kingdom of Romania

May the last King of the Romanians be welcomed by choirs of angels into the Kingdom of Heaven and May he Rest in Peace in the light of the Holy Face.

May his cause be vindicated by the successful restoration of the monarchy, a return to traditional authority, grounded in faith and family and may Romania be lifted to her full potential as a people and as a country.

This is my sincere wish. -MM
Posted by MadMonarchist at 10:45 AM