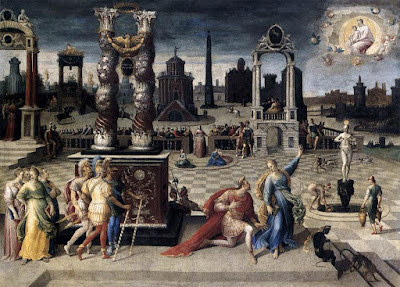 In the old days of Christendom, one could mention the Tiburtine Sybil and the prophecies regarding the Roman emperors and many people, certainly educated people, would know immediately what was being talked about. Today that is certainly not the case and so some background information must be provided as, aside from experts in this particular field or, perhaps, art history aficionados, no average person will know what this is all about. First of all, we have the figure of the Sybil. The sybils were women who acted as oracles, usually associated with a particular holy site in pagan times. The custom originated in ancient Greece but soon spread to Italy, Asia Minor and other areas. The Oracle of Delphi is probably the most well known example of a sybil. These women were often sought out for prophecy and divine guidance as it were by powerful people. In the time of the Roman Empire one of the most prominent was the Tiburtine Sybil, known as such because she resided at the town of Tibur, an old Etruscan town, which is today the Italian city of Tivoli. Many stories grew out of this particular sybil later on among Christians concerning the Roman emperors.

One thing to clarify at the outset was that the sybils were, obviously, not Christian religious figures but were associated with paganism. However, once upon a time, this did not cause Christians to discount stories about their prophecies. They knew from their Bible stories that the pagan priests of Pharaoh were able to perform seemingly miraculous deeds or that the witch of Endor had been able to summon up the spirit of Samuel for King Saul, for example. It was taken for granted that people who were not worshippers of the Christian God could still possess amazing gifts and that God could use such people for His own purposes. Later examples of such things might include the Native American shamans who, according to various stories, made prophecies about the coming of the Spanish or had visions of the Blessed Virgin to prepare them to receive the Gospel when Christian missionaries later arrived. There was also, it must be said, an effort by the Christians of the “Ages of Faith” to look back at classical history and to incorporate it into their new, Christian, world view. The story of Pope St Gregory the Great, momentarily resurrecting the Roman Emperor Trajan in order to baptize him, is an example of this. Virtually everyone discounts this story now but it reflects the wish of people to see so great a man, such a revered emperor, saved from eternal damnation for not having been a Christian.

The first recorded instance of the Tiburtine Sybil crossing paths with a Roman emperor came in the time of Augustus Caesar. The story goes that Emperor Augustus approached the Tiburtine Sybil, Albunea, at the Temple of Vesta to ask if he should be worshipped as a god. This meeting was once a very common thing to see depicted in art. An Archbishop, Jacobus de Voragine, later recorded this story, stating that it had been handed down to him by Pope Innocent III, that Augustus met the Sybil and that the Sybil revealed to him one who would come after him, greater than he, and showed him a vision of the birth of Christ, referring to the Blessed Virgin as “the Altar of Heaven” where a church was later built and dedicated as such. According to Virgil, the Cumaean Sibyl also made such a prophecy about the birth of Christ and stories such as these, which became widespread, explain why the sybils were included in Renaissance works of art, such as by Michelangelo, alongside Old Testament prophets in foretelling the coming of the Christian era. These would also coincide with other stories, once popular, about the early Roman emperors taking a “hands off” approach to Christ. Stories circulated, for example, that Emperor Tiberius, who did not exactly have a reputation for kindness, ordered that Christians not be persecuted or accused and even talked of including Jesus Christ in the pantheon of Roman gods.

If such stories were true, the prophecies of the Tiburtine Sybil to Emperor Augustus might help explain why such an attitude was taken or why someone like St Paul would prefer to put his fate in the hands of the Emperor Nero rather than his own Jewish countrymen of the Sanhedrin. There were actually a great many such accounts of miraculous events and Christian prophecies concerning the pagan Roman emperors before the more famous events after the Battle of the Milvian Bridge and the baptism of Emperor Constantine the Great. There was the story of Pope St Clement I being a cousin of the Emperor Diocletian (in all likelihood he was a freedman who had been in his employ), Emperor Antoninus Pius condemning any illegal attacks on the Christian community, the dramatic story of Emperor Marcus Aurelius and the “Thundering Legion” or his son Emperor Commodus having a Christian mistress which is often pointed to as a reason for this fairly irascible Caesar refraining from persecuting Christians. She is also credited with influencing Emperor Commodus to release Pope St Calixtus I from prison. A revelation, passed down the imperial line, originating in a pagan source that they would not question, would be a possible explanation for such behavior.

However, other than foretelling Emperor Augustus of the birth of Christ, the most famous prophecy of this sort from the Tiburtine Sybil concerning an apocalyptic vision about a certain Emperor Constans. This prophecy foretold of a Greek king who would rise to become “king of the Romans and the Greeks” or, in other words, the Roman Emperor of East and West alike again, who would be very tall, very handsome, very wealthy, will destroy the enemies of Christianity, end all pagan worship, convert the Jews and defeat the massive, mysterious powers of Gog and Magog, after which he will retire to the Holy City of Jerusalem, abdicate his throne and hand the empire over to God. At that point, the Sybil describes what we would recognize as the rise of the Anti-Christ, coming from the tribe of Dan, who will win the people over by miraculous acts, who will destroy the Roman Empire and only then reveal himself as the agent of evil from the Temple of Jerusalem. This, of course, is very similar to other prophecies concerning “the Final Emperor” or the “Great Catholic Monarch” who will lead a last revival of Christian power before the end of the world.

An interesting point in the prophecy of the Tiburtine Sybil is that this monarch is named as Emperor Constans and that the prophecy was made, as near as we can tell, around the year 380 AD, a few decades after Rome had already had the reign of the historic Emperor Constans, the son of the Christian Emperor Constantine the Great, who came to the throne in 337 and ruled until he was assassinated in 350. If we were to be skeptical and presume that the Sibyl was trying to tailor her message for the audience, or that the story was invented later to appeal to Christian sensibilities, naming this future Christian hero after Emperor Constans would not make much sense. He was not known for being a terribly nice man or a terribly good emperor, though he too was part of a prophecy of his own concerning his grandmother, the Christian Empress St Helena. The prophecy said he would die in the arms of his grandmother and when he was assassinated it was after being cornered in a military post named Fort Helena.

So, what is the point of all this? I will be the first to admit it is largely just an act of indulgence on my part since I am interested in this sort of stuff. As with anything of this nature, some people will be inclined to believe and others will be inclined to disbelieve it and there really isn’t anything that anyone can say to prove either side right or wrong. I will say, at the very least, the existence of these stories and that they were passed on for so long reveals something to us about the people and the faith of Christendom. Sources of revelation were not rejected for being pagan, the people of the time recognizing that God can use anyone to participate in His plan. It shows also the centrality of the Roman Empire and the Roman emperors in the hearts of minds of Christian people and how central that Roman imperial tradition was to Christendom itself. The Christians of the late Roman Empire, even with all that was going on around them, did not cease to believe that their ‘realm’ on earth was something special, that Christianity had sprang up in that empire was no accident and that the Roman Empire was something that others would strive to bring back, that they hoped ultimately would come back, with all Christian, European peoples united under one divinely ordained Caesar.
Posted by MadMonarchist at 12:26 AM