The Queen and Communist China 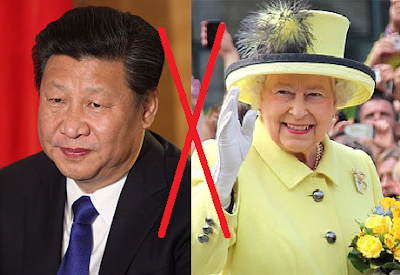 There was recently a bit of a media 'dust-up' over remarks made by HM the Queen about the recent visit by President Xi Jinping of China and other leading Communist Chinese officials. It started when Her Majesty was overheard telling a guest at a recent garden party that the Red Chinese had been "rude" to her ambassador. There was an immediate flurry of media activity about this since the Queen usually keeps virtually all of her opinions to herself and the Royal Family as a whole is under extreme pressure to have no opinion on anything controversial at all. Personally, I was glad to hear Her Majesty speak her mind, even in this very, very small way, about a visit that was such a blatant sell-out of the U.K. by the political class in London eager for Chinese cash. The Chinese Communist government, of course, was very upset by the Queen's brief phrase and proceeded to prove how 'not rude' they are by referring to the west as "barbarians" and assuring the Chinese people that these uncouth foreigners will improve in time as the thousands of years of Chinese civilization rubs off on them. The response was actually funny, considering the source.

The Communist government's response sounded more like something Emperor Qianlong would have said, dismissing a British envoy. It is a sign of how bourgeois modern China has become and I'm sure Chairman Mao is spinning in his mausoleum that one of his successors as dictator of mainland China would ever have anything to do with "class enemy" like the British monarch. It would be only fair as I was rather distressed that Her Majesty would be called upon to receive a pseudo-Marxist tyrant like Xi Jinping in the first place. I thought the ladies of the Royal Family (excluding the Queen) went overboard with their red dresses and I applauded HRH the Prince of Wales for boycotting the state dinner, specifically to show his disdain for the Communist oppression of Tibet. Previously, the Prince also caused a stir by a less than flattering observation he made about the Red Chinese at the handover of the Crown Colony of Hong Kong. What should be the real scandal is the way the British political class have kowtowed to the Communist rulers of China *for decades* enduring far more from them than merely "rude" behavior.

Let the record show that in 1967 Chinese Red Guards attacked an invaded the British embassy in Peking, assaulting the people trapped inside to an extent some would call torture. The Communist government condoned the action and a similar attack on British officials in Shanghai. The same year, troops of the People's Liberation Army fired on British police officers in Hong Kong, killing five, an act most would consider an act of war. Chinese envoys even attacked British police officers in London and in 1982 Deng Xiaoping openly threatened to invade Hong Kong. Yet, after every outrage, the British government has looked the other way, given in to the demands of the Red bandits and gone on with normal diplomatic relations with them as though nothing had ever happened. The Queen was entirely accurate in her remark and, indeed, could have justly used even harsher language in describing such a despicable regime.
Posted by MadMonarchist at 1:31 PM