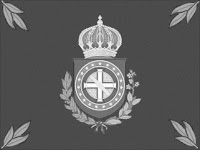 If I remember (and honestly, part of the reason I post these little "warnings" is to help me remember) around Tuesday probably I will be refreshing the "Images" page. The "Rising Sun" will be setting and we will move to South America and the land of supermodels and slow, sultry summers: The Empire of Brazil. Back in their imperial heyday Brazil was right beside the USA as the major powers in the Americas, in attracting immigrants and rapid economic growth. Some members of my own family even moved there after that little 'difference of opinion' called the American Civil War. The Empire of Brazil was largely the dominant power in South America and a very respected country in the world, thanks in no small part to Emperor Pedro II particularly. Hopefully, one day, Brazil will decide to embrace a higher level of greatness again and restore the empire. The "Walls" page has also been updated (and will be again), though I don't know how well that's going over. I may think of something else to replace it with.
Posted by MadMonarchist at 4:42 PM