A Word on King Umberto I 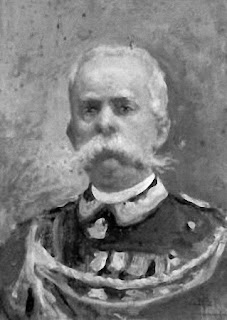 It was on this day in 1900 that His Majesty King Umberto I of Italy was assassinated by an anarchist in Monza. It was a cruel and tragic fate for a man known as "the Good" King. His murderer was the Italian-American Gaetano Bresci who said it was done in retaliation for the so-called Bava-Beccaris massacre in Milan in 1898. For those who don't know, there are many claims and counter-claims and accusations about that event but the bottom line is that there were protests which turned to widespread rioting, endangering lives and property, and all of it pushed by the radical socialists. The government sent in the army to restore order under General Fiorenzo Bava-Beccaris who ended the rioting by having his troops fire on the crowd. When King Umberto I later decorated the general for his service to Italy and the House of Savoy this so infuriated Bresci that he immediately left America to return to Italy for the sole purpose of murdering the monarch. Despite the horror of the assassination, many have tried to generate sympathy for the murderer by slandering King Umberto over what happened in Milan. This is not only dishonest, it is grossly hypocritical in most cases. 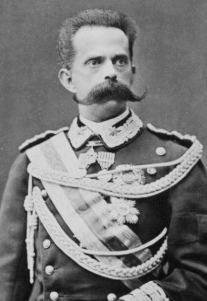 In the first place, it is dishonest because the King, if he overreacted, did so on the basis of false information. He was being given reports of a revolution, not simply in Milan but threatening the whole country with partisan bands gathering at the Swiss border to launch a major attack on his country. What would any other leader have done in his place with those same reports? Biased sources make it sound as though the army went in with the intention to harm helpless, innocent people, something which really should be considered too ridiculous to take seriously. However, there were in fact many traitors, many republican socialists who were arrested. One of the republican socialists there at that time was none other than a young Benito Mussolini. This is where the hypocritical element comes into play. I am always astounded by those who so vociferously condemn the strict measures taken in response to the socialist riots at Milan, blaming it all on King Umberto I, yet these very same people are also the ones who usually condemn his son and heir King Vittorio Emanuele III for not declaring a state of siege and sending in the army during the "March on Rome" by the Fascist Blackshirts in 1922. One King is condemned for setting the army on "the people" while another King is condemned for not doing exactly that! 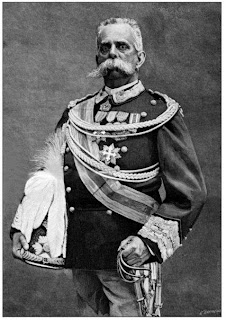 I have often wondered (and we can never know) if the memory of how his father was treated over using the army in Milan was going through the mind of Vittorio Emanuele III when he struggled to deal with the Fascists marching on Rome. If a state of siege had been declared, and the army sent in, how many people would have been killed? Would the chattering class feel the same outrage as they did over the events of 1898? I cannot help but wonder. The problem is that, when it comes to public disorders, one never knows how they are going to work out. Some come to nothing while others can grow larger and larger until the entire country is ruined. One thing is certain. Anyone who knows the facts about the life and character of King Umberto I should know that he would never do anything to intentionally harm his people. This was the King who spared the life of the man who tried to murder him shortly after coming to the throne, the King who went in person and gave from his own private funds to help those displaced by the floods in Verona and Venice in 1882 and the man who saved many lives after the earthquake in 1883 by ordering rescue operations to continue five days longer after others said all hope was lost. This was the King who gave generously to help the victims of the cholera epidemic in the south in 1884 and this was the King who, privately, without public notice, paid the Ethiopian Emperor Menelik II in the aftermath of Adowa to buy the freedom of the Italian soldiers being held captive.

Umberto I was a "good" King, there should be no doubt, who did the best he could in all circumstances. His assassination was a tragedy for Italy and for the world as well as it was part of a trend of anarchist assassinations. Even for the United States as it was the regicide of Umberto I which inspired the anarchist assassination of U.S. President William McKinley the following year. Additionally, if he is to be criticized for using the troops in Milan in 1898, Vittorio Emanuele III should not be so criticized for not taking the same action in Rome in 1922.
Posted by MadMonarchist at 11:31 AM