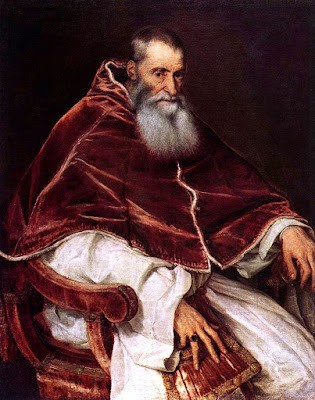 Few Roman Pontiffs ever inherited so unfavorable a position as Pope Paul III. Rome had been sacked, much of Italy was in ruins, Protestantism was taking root and the papacy itself was firmly in the grip of the German Emperor and King of Spain Charles V. However, Pope Paul III would not be deterred by any of that. A Renaissance prince, rather typical of the period, he had his negative as well as positive qualities yet his pontificate would be remembered as one of pushing back wherever possible and accepting the ills of the day when not. A man from an illustrious family whose name appears often in papal history, he was born Alessandro Farnese on February 29, 1468 in Canino, in what was then Latium, part of the Papal States. His family were well known in the ranks of the condottiere and his sister, the famously lovely Giulia Farnese, had been the beloved mistress of the notorious Pope Alexander VI. As a son of the Italian Renaissance, Alessandro Farnese would be known for his great culture, his love of art as well as for his political machinations and nepotism. However, as with the Renaissance Popes as a group, he was a more pious man than he is usually given credit for.

It is true that Alessandro Farnese lived a rather colorful and worldly life as a young man. He fathered four illegitimate children but this was all before joining the priesthood. By the time he was ordained in 1519 he had abandoned his worldly ways and dissolute life and devoted himself to the service of God. It is interesting how often this fact, which is not uncommon among the Renaissance Popes, is often left out of the popular histories. In spite of the recent obsession with mercy and forgiveness, the Renaissance Popes often seem to be denied either and are forever tainted by their misdeeds prior to becoming men of the cloth. In fact, many of those people absent-mindedly regard as notorious, were, like Alessandro, faithful to their vows once they had taken them. His career in the Church was undoubtedly aided by his family connections but he was by no means unfit for the stations he held. In time he was made a cardinal bishop and was dean of the Sacred College prior to being elected at the age of 66 on October 13, 1534 after the death of the long suffering Medici Pope Clement VII. He took the name Paul III and quickly set to work trying to restore a sense of normalcy about the Church and begin pushing forward again.

His election had taken only two days, a sign of the respect his fellow cardinals had for him as well as being seen as no friend of the King of France but also not beholden to the German Emperor though he was careful not to cross him. As someone who owed his red hat to his sister being the mistress of Pope Alexander VI, it should not be too surprising that, while his own life had changed considerably upon entering the Church, Pope Paul III was not above laughing at a bawdy comedy, turning a blind eye to the indiscretions of the Roman court and elevating his teenage grandsons to the Sacred College. Nonetheless, when it came to matters of the Church, the spiritual life of the Church and the revival secular historians have dubbed (erroneously) the, “Counter-Reformation”, Pope Paul III provided invaluable leadership to Catholic Christendom.

In political matters, Pope Paul III was not too timid to clash with the secular authorities. He famously excommunicated King Henry VIII of England for his divorce of Queen Catherine of Aragon, appropriation of Church property and various other desecrations of the sacred which Henry termed as a ‘campaign against idolatry’. Paul III was though careful not to find himself opposed to Emperor Charles V and he backed the Habsburg war against the Schmalkaldic League, an alliance of Lutheran princes in Germany which was happily in his own interests as well. However, Paul III knew there was only one thing that would fully satisfy Emperor Charles V and it was the one thing all of his predecessors since the first outbreak of Lutheranism had been reluctant to do; call a general council of the Church.

Emperor Charles V had been pushing for a council for years. Although he would make peace and grant toleration to Protestants when it served his interests, he most wanted the Church leadership to address the problems that Luther and his fellows made issue of so that some sort of reconciliation could be made that would restore the tranquility of Christendom and stop his German subordinates making war on him and each other. However, history had taught the popes that this was a dangerous thing to do. Such councils, particularly those pushed for by German emperors, frequently ended with an effort to depose the Pontiff and replace him with someone more amenable to the imperial position. This resulted in a cycle of antagonism between popes and emperors which could be extremely disastrous as such a thing had only recently resulted in the near death of Pope Clement VII and the Sack of Rome which was absolutely unprecedented in its horror and bestial cruelty. Pope Paul III finally put a stop to this cycle by calling the Council of Trent which first met in December of 1545 and would carry on for quite some time addressing the many problems and corruptions that had permeated the Church.

This actually had a huge impact and was probably the single most significant thing that Pope Paul III did during his reign. Nothing happened overnight, but the Council of Trent did provide the framework and the starting point for what would be a Catholic revival which would ensure that the Church of Rome not only survived the Protestant storm but would push back against it, ultimately regaining at least a good deal if not all of what had been lost. As part of this overall campaign, Pope Paul III also continued the work of his predecessor Clement VII in pushing for reform in the religious orders. The Theatines, Capuchins, Somaschians and Barnabites were rejuvenated, the Ursulines (a teaching order of nuns) was established in 1535 who would prove quite effective and in 1540 Pope Paul III officially recognized the Society of Jesus. In 1550 he would confirm their constitution and he showed great favor to the Jesuits, viewing them as the spiritual ‘shock troops’ of Catholicism in combating the spread of Protestant sects. He also established and gave extensive powers to the Holy Office of the Roman Inquisition. Despite his worldly reputation, Paul III was obviously someone who took his faith seriously.

So, there were two sides to the coin of Paul III. On the one hand he was the pope who made his teenage grandsons cardinals, pushed the power of the Farnese family wherever possible, who made his son Pier Luigi the Duke of Parma and lavished wealth on his grandson Ottavio so that Margherita of Austria would marry him and yet, on the other hand, he was the pope who began reforming the Church, authorized zealous new religious orders, urged respect for the persons and property of the Native Americans and condemned their enslavement. He was also a great patron of the arts and paid heavily for the rebuilding and refurbishment of Rome itself. Probably his most noteworthy project was commissioning the great Michelangelo to finish his painting, “Last Judgment” in the Sistine Chapel. He had a relatively long pontificate for a man who was 66 when he first was elevated to the Throne of St Peter. Pope Paul III died of fever on November 10, 1549 after reigning 15 years and 29 days. He had his good points as well as bad ones but the good was far more significant whereas the bad can generally be reduced to being partial to his own family. That should be considered easily forgivable, especially considering the very valuable work he accomplished as well as setting the stage for greater successes to come. On the whole, Pope Paul III is another example which should prove that the supposedly notorious ‘Renaissance Popes’ were not nearly so awful as most imagine.
Posted by MadMonarchist at 8:54 AM