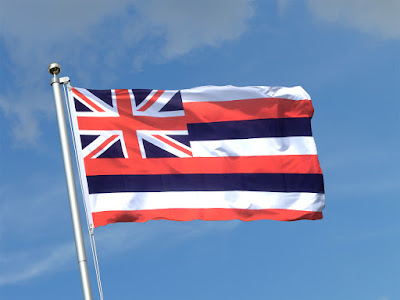 Today is flag day in the state (and former kingdom) of Hawaii or Ka Hae Hawaii day. Among the state flags of the United States, Hawaii stands out. It looks like it belongs but not in the present day. It looks more like a flag from New England during the move towards independence. Indeed, there were flags used by New England regiments in the War for Independence that were very similar, almost identical. However, the state flag of Hawaii is, like the flag of Texas, the same flag as had been the national flag of Hawaii. It was intentionally made to reflect the styles of both the British Empire and the United States, the two foreign powers the Kingdom of Hawaii had most contact with. Originally, of course, Hawaii was not a country and no one had a flag or even really an idea of what one was. It was a totally foreign concept. However, that all changed with the arrival of the British and the Hawaiians took their example from the British. When King Kamehameha I united the Hawaiian islands into a single country under his rule, he used the British flag and the Red Ensign remained the only national flag used by the Kingdom of Hawaii until 1816. 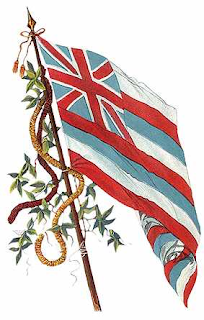 By that time, things were changing around the world. The United States of America had established itself as a power that was here to stay and was starting to make contact with other nations around the world. Some stories say that the U.S. objected to the King flying a British flag during the War of 1812 but that is doubtful. In any event, advisers did warn the King that flying the flag of a foreign power, even an ally (as they regarded the British), was bound to cause problems with other foreign powers. So, the Hawaiians wanted a distinct flag of their own but one that would also show their friendship with United States as well as reflecting their history of close relations or protectorate status with the British Empire. The result was the Hawaiian flag as we know it today, the Union Jack in the canton as a reference to Great Britain and the field of stripes as a reference to the style of the American flag. The alternating white, red and blue stripes, eight in total, represent the eight inhabited islands of the Kingdom of Hawaii; Hawai'i, O'ahu, Kaua'i, Kaho'olawe, Lana'i, Maui, Moloka'i and Ni'ihau. This standardization of the number of stripes to represent the islands was done by King Kamehameha III.

The Kingdom of Hawaii was later overthrown in a U.S.-backed coup by American settlers who proclaimed a republic, however, rather like the short-lived "Republic of California" it was never regarded as a legitimate country, recognized by foreign powers but was simply a stepping stone on the road to annexation as a U.S. Territory. That happened on August 12, 1898 and so the flag of the Kingdom of Hawaii was retained and continued in use throughout the period and after Hawaii was accepted as a state of the Union on August 21, 1959 and on to today. The current heir to the throne of Hawaii is Quentin Kawananakoa or Prince Kawananakoa, who followed the tradition of his family in being involved in politics as a member of the Republican Party. Hawaii, however, being a very liberal, pro-Democrat state, some Hawaiian natives have rejected him because of this and give their support to members of other family lines whose political views are less conservative and more in line with their own. 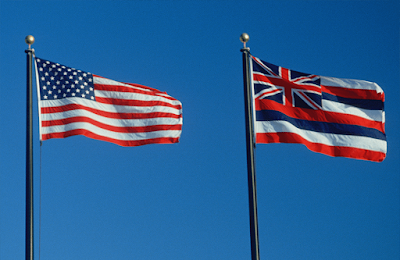 Posted by MadMonarchist at 3:22 PM