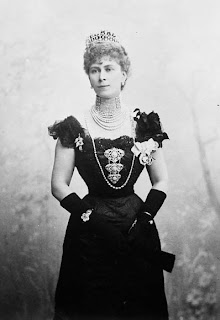 Princess Mary of Teck was born on May 26, 1867 in London at Kensington Palace to Duke Francis of Teck and Princess Mary Adelaide of Cambridge. Even though her title derived from a small corner of the German Kingdom of Württemberg, Mary of Teck was British born and raised. She was the oldest of four children and the only girl so she grew up tough, disciplined and used to acting as a peacemaker when her little brothers fought. She also helped her mother with her charitable projects. Soon, she began to catch the attention of Queen Victoria and it was hoped that the attractive, straight-laced princess would make a suitable wife for Prince Eddy, eldest son of the Prince of Wales and second-in-line for the throne. The Queen had hoped that marriage would tame her son (a hope that was not entirely fulfilled) and now hoped that Princess Mary of Teck would do the same for Prince Eddy -who had everyone a little worried. His private life was and is the stuff of some pretty outrageous gossip, although when it comes to producing any hard evidence to back up the scandalous rumors things become a bit murky. In any event, whether or not the Princess of Teck would have made a suitable bride for the heir to the heir to the throne did not finally matter as Prince Eddy died of influenza in 1892.

As the Royal Family was in mourning, Princess Mary comforted the survivors and in so doing caught the eye of the new next-in-line Prince George. Queen Victoria, who had a very high opinion of Mary, still thought she would make an excellent consort and approved the match. So, the next year, in 1893 the two were engaged. This time it was not the result of an arrangement but a genuine connection and the two were to have a very successful and lifelong marriage. On July 6, 1893 the two were married at St James’s Palace and Princess Mary became the Duchess of York. Unlike his father (or most of the male members of his family excluding King George III) Prince George was very devoted to his wife, never took a mistress, and after their wedding, in quick order, six children were born to the happy couple. First was Prince Edward (later King Edward VIII) born in 1894, followed by Prince Albert (later King George VI) in 1895, then the Princess Royal Mary in 1897, Prince Henry in 1900, Prince George in 1902 and finally the unfortunate Prince John in 1905. Prince John was afflicted with epilepsy and only lived to the age of 13 but, despite what many today seem to believe, was much loved and closely taken care of by his mother. 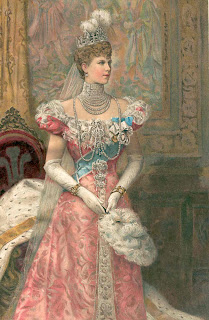 It was customary to have nannies to take care of the royal children, but Princess Mary was not a distant mother, spending a great deal of time with her children, teaching them many things herself and when obliged to make overseas trips around the British Empire would break down in tears at having to leave her children. She was a very good mother, assumptions to the contrary probably being a result of her very strict, prim and proper appearance in public. In private, however, she was quite affectionate, caring and even playful. In 1901 Queen Victoria passed away and her son became King Edward VII. So, later that year, George and Mary became the Prince and Princess of Wales. With these new positions came even more demands on the time of the couple and Princess Mary traveled with her husband to Austria, Germany, Egypt, Greece, India, Spain and to Norway for the coronation of King Haakon VII and his wife Queen Maud (Mary’s sister-in-law). In 1910 King Edward VII died and the former Prince and Princess of Wales were crowned King George V and Queen Mary on June 22, 1911. It had always been the intention of King George V to change (and improve) the public reputation of the monarchy which had gone through a rough patch with the escapades of his father and older brother and this he certainly did and Queen Mary was a vital part of that.

King George and Queen Mary were the image of the model family; a happy couple, devoted and faithful to each other with many children who focused on doing good deeds and setting a proper example. They were the first sovereigns to celebrate their accession as Emperor and Empress of India on the subcontinent and when World War I erupted she set a magnificent example at the palace for the Royal Family being in solidarity with the British public. She saw to it that everything was rationed (as it was for the people) and even though it caused her great emotional distress she frequently visited the badly wounded troops of the BEF evacuated from the front in France and Belgium. Just before the war ended Queen Mary was devastated by the death of her ailing son Prince John; few at the time knew just how devastated. Yet, through it all, she was seen as a tower of strength at every public appearance, proper, determined and devoted to duty. She certainly was a great help to King George V who relied on her advice, emotional support and calming influence. 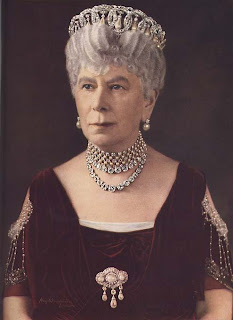 Eventually, the King began to fall victim to respiratory problems (he was a heavy smoker as his father had been and his son would be) and Queen Mary was his constant support. Even the doctors who were brought in credited the King’s survival with Queen Mary’s constant care and attention. At his silver jubilee, King George V lauded Queen Mary in a public speech which he placed at the end of his remarks for fear that he would be overcome by emotion saying, “I cannot trust myself to speak of the Queen when I think of all I owe her”. She was deeply saddened when George V died in 1936 and then had to deal with the potential crisis involving her son, King Edward VIII, and Mrs. Wallis Simpson. Queen Mary, although she appeared aloof and detached in public, cared deeply for her son and tried to support him in the midst of this scandal. However, she never viewed Mrs. Simpson as an acceptable consort for a King-Emperor. The Queen also never recognized the validity of divorce as a dutiful and sincere member of the Church of England. When King Edward decided to abdicate it was something incomprehensible to Queen Mary whose entire life had been defined by her devotion to duty. However, accepting that there was no other alternative she did her best to help her second son, King George VI, in taking leadership of the British monarchy at such a critical time.

During World War II, as she had in the last conflict, Queen Mary visited factories serving the war effort, met with soldiers on British bases and was even known to stop and giving walking soldiers arrive when spotted on the roadside. She also helped in the nation-wide campaign to gather scrap metal and other supplies to support the war effort. Queen Mary also took an active interest in the lives of her granddaughters Elizabeth and Margaret, passing on to them her appreciation for art and culture. She out-lived her son King George VI in 1952 and saw her granddaughter succeed to the throne as Queen Elizabeth II. After that moment, for a time, Great Britain had three queens; Queen Mary, Queen Elizabeth the Queen Mother and Queen Elizabeth II. She did not live to see the coronation though as she died on March 24, 1953 of lung cancer at the age of 85. She was buried next to her beloved husband, King George V, at Windsor Castle.
Posted by MadMonarchist at 12:08 AM