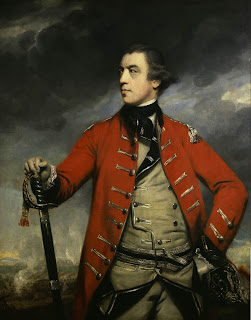 John Burgoyne was born in Sutton, Bedfordshire on February 24, 1722 into a well-to-do family and as a young man in 1740 purchased a commission in the 13th Light Dragoons. He quickly became known for his dramatic, flamboyant style and was nicknamed “Gentleman Johnny”. Even as a young officer he had a reputation for grand style, lavish uniforms and high debts. Nonetheless he was promoted to lieutenant only a year later. He had to live abroad for a while after eloping with the daughter of Lord Derby but was back and made amends in time for the French and Indian War during which he rose to the rank of lieutenant colonel in the elite Coldstream Guards and was instrumental in the Portuguese campaign.

Burgoyne often seemed to personify the worst of the stereotypes of British officers of the period with his grand manner, obsessively particular about his uniforms, given to entertaining and, after the death of his wife, his mistress and illegitimate children. Yet, to say this was all he was would be unfair. He served in Parliament, was an accomplished playwright and a very innovative military officer. He pioneered the use of light cavalry and encouraged subordinates to act on their own judgment and for his soldiers to adapt their tactics beyond the rigid, linear system. He was known as something of a dandy in society life and in politics generated some controversy by his attacks on Lord Clive of India.

His greatest chance for fame came with the outbreak of war in the American colonies. By that time a major general, he was dispatched to Boston in 1775 as soon as the conflict began but he did not take an active part in the first major battle at Bunker Hill. With little to do he returned to England but soon came back to America, specifically to Canada, where he took charge of the northern front. He relieved the beleaguered garrison at Quebec under Sir Guy Carleton and together they drove the revolutionary forces out of Canada. However, Burgoyne worked behind the back of his superior (Carleton) to have him removed from military command. King George was finally persuaded to do so and the command of British forces in Canada was given to General “Gentleman Johnny” Burgoyne.

The plan was for Burgoyne to strike south from Canada across Lake Champlain while General William Howe, with the main British army, advanced northward from New York. The two forces were to meet in Albany and thus cut off the troublesome New England colonies from the middle and southern colonies. However, the offensive was not well coordinated and some historians have since doubted whether all involved were even aware of the broader strategy. Nonetheless, confident that could overpower any opposition Burgoyne set out on the campaign he was sure would be his moment of glory. With 7,000 troops; British regulars, Hessian mercenaries, American loyalists and Indians, he began the march south.

At first, all went according to plan. He captured Ft Ticonderoga, was promoted lieutenant general and later captured Ft Edward. However, rebel forces harried him every step of the way, wrecking bridges and felling trees that slowed his progress. Finally he was forced to make a choice; return to Canada while there was still time or break off from his lines of supply and communication and press on southward in the hope of linking up with Howe. Always confident and ever a gambler, Burgoyne rolled the dice and marched on. It was to prove a disastrous mistake. Slowed by his artillery, stopping to dispatch foraging parties and the harassment of rebel forces the Continental Army under General Horatio Gates had time to gather and overwhelming force to oppose him in the area around Saratoga, New York.

In a series of battles through September and October of 1777 the British were thwarted by rebel attacks led by Benedict Arnold. Superior British discipline was able to fend off disaster but Burgoyne was encircled, outnumbered and had no hope of relief. Finally, on October 17, Burgoyne decided he had no choice but to surrender the nearly 6,000 troops still on hand. By negotiation he was able to obtain very generous terms but the battle of Saratoga was a humiliating blow to the British war effort and was the event that prompted King Louis XVI of France to recognize the United States of America and join the war against Britain.

Burgoyne returned home a very unpopular man but, by 1782, had managed to restore his rank through friends in high places. He was made commander-in-chief in Ireland and continued to dabble in politics until his death on August 4, 1792 and was buried in Westminster Abbey.
Posted by MadMonarchist at 1:13 AM