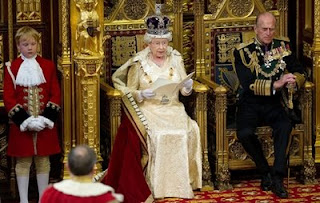 In the traditional display of pomp and ceremony that monarchists like me thrive on, HM Queen Elizabeth II opened Parliament with her (government-issued) speech from the throne. It all looked as magnificent as usual but this was a speech for hard times, dominated by plans for cost-cutting, budget clean-ups and getting rid of waste. In other words, it was the message of a government that knows it is out of money but cannot bring itself to actually get rid of the vast social welfare-state that is at the heart of all the financial woes. It would be political suicide to say so openly, but it seems to me an unavoidable truth that when you have a government-run healthcare system that employs more people than any other organization on earth save the Indian national railway system and the People's Liberation Army no amount of fat you might trim from here or there will be sufficient to save the British economy.

It also does not help having the Duchess of York in a money-grabbing scandal days before such a speech when everyone in the UK is being forced to cut back. On that score, let me say that I have never been a fan of the Duchess of York, I have never really liked the woman, I didn't like her cheating on her husband, I didn't like her fostering the "me against the monarchy" mentality and I didn't like her selling herself for advertisements and I certainly didn't like this latest low behavior which I can only hope will shock her to her senses. That being said, I also don't like entrapment and the targeting of members of a certain family (notice it is always the wives) by these "journalists" who are out to embarass the Royal Family in any way possible (and contrary to many reports the Duchess is *not* a royal or member of the RF but they are the ultimate target). What she did may not be a crime but is was despicable, but it was also pretty low to set up this whole sting operation to entrap someone who is not a royal, not a government official, not on the public payroll etc. There are plenty of legitimate targets out there to go after.

Getting back to the throne speech though, one bit of at least somewhat good news was the promise by the government (via the Queen) that the British public will at least be consulted before any more of their sovereignty is shipped overseas to the EU. As regular readers will know I am certainly no fan of unfettered democracy nor rule by referendum, however, when it comes to putting any brakes at all on the power-grabbing bureaucrats at the EU, I will take whatever I can get and call it at least a step in the right direction. Now, if only they would get out of the EU altogether, look to their sovereign for their sovereignty (what a novel thought), restore the House of Lords and end this "senate" nonsense and slash the welfare state to death we would really be moving things in the right direction. At least from where I am sitting.
Posted by MadMonarchist at 12:13 AM