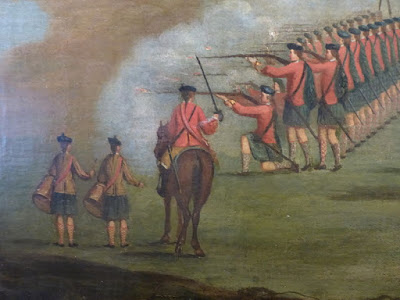 Today is St Andrew's Day, the "national day" of Scotland as the feast day of Scotland's patron saint, Andrew. As such, it is a day to celebrate all things Scottish and, for me at least, nothing symbolizes the best of Scotland like the highland regiments of the British army. Today they have been sadly reduced but best not to dwell on that now. One of, if not the, most famous of these regiments was the 42nd Royal Highland Regiment of Foot, better known as the "Black Watch". It was formed in the aftermath of the 1745 Jacobite Uprising and, naturally, consisted of highlanders who had supported the government which meant they tended to be Protestants in their religion and Whig in their politics. The Black Watch would have a long history of many great victories and ample military glory, however, one of her most famous engagements was not a victory at all but a very heroic, tragic and bloody defeat. It would go down in history as one of the worst British defeats but for the men of the Black Watch it would be remembered for the tremendous sacrifice their soldiers made. It was during the French and Indian War (which regular readers will know all about) and happened at a French fort called, at the time, Fort Carillon, later re-named Fort Ticonderoga on the east border of what is today the state of New York, south of Lake Champlain.

The French, and their Indian allies, had been winning stunning victories over the British despite the fact that they were outmatched and the governments in both Paris and London had focused mostly on the European front of the war. The Marquis de Montcalm, commander of the French forces in North America, had won a string of victories in 1756 and 1757 despite having the odds against him. Although he did not enjoy it, the lack of French support for the war in the American colonies meant that he had to augment his forces with American Indian tribes who were difficult to integrate into European-style warfare. However, for a change, in what was to prove his greatest victory, the French would be fighting on their own. The British government, after a number of embarrassing setbacks, decided to made North America the main focus of their war effort, seeing it as of greater long-term value which did not exactly best please King George II who was very concerned about his native Hanover in Germany falling into the hands of King Louis XV of France. However, his fears were set aside in favor of a new, major, offensive in North America.

The British planned for a huge, crushing blow that would strike northward, via Lake Champlain, retaking lost outposts and ending in a massive attack on Quebec City, the capital of New France (Canada) which would win them the war. Doing that, however, would mean that they would have to take Fort Carillon which the French had just built to guard the southern approach to Lake Champlain (the lakes and rivers being the most efficient ways to travel in North America at the time). On paper, this seemed to be no great challenge. General James Abercrombie would have nearly 30,000 British troops at his disposal, a huge army by the standards of the time and place, with many excellent units such as the Black Watch. The Marquis de Montcalm, on the other hand, would have only 3,600 soldiers to defend the fort and many of these would be Canadian militia rather than French regulars. However, perhaps overconfident because of all of this, Abercrombie would fight this battle with all of the strategic calculations of a bulldozer. The Marquis, on the other hand, had his men in well fortified positions, with men in trenches out in front with other men on the walls to give them covering fire and obstructions in front of all of them. Although his defenses could have been more solid still, they would prove more than up to the task given that Abercrombie's plan was simply to charge right in. 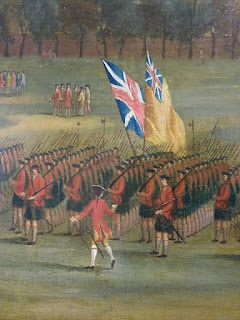 Abercrombie's force approached on July 8, 1758 with local militia units and the famous "Roger's Rangers" out front having no problem forcing the French skirmishers back. However, Montcalm had good troops under his command in the center with good protection for them and artillery in redoubts to cover his flanks. One of these was unfinished but, it would not matter, because Abercrombie would be charging straight in, confident that his regulars could smash the French without undue difficulty. He was, of course, to be proven completely wrong. In fact, from the outset, everything seemed to go wrong for the British. Units were drawn into battle early and not as planned which led to disorganized attacks that failed and were very costly. The Black Watch was supposed to have been kept in reserve but, seeing their comrades engaged, demanded to join the fight and so were sent in as well. The result was that the British troops charged into a killing zone of withering French fire. Montcalm, who had thrown off his coat and was dashing among his men in his shirtsleeves, kept up French discipline and morale while the British commander was far away from the action (which had broken out before he had planned). Nonetheless, Abercrombie ordered more attacks, thinking each one would break the French lines and carry the day. Instead, he simply sent more men to certain death.

To make matters worse, the British had no artillery to provide fire support for their attacks. The barges carrying the guns had gone the wrong way and ended up floating down within range of the French in Fort Carillon who quickly spotted them and sank several of the barges in quick order. Abercrombie then sent in his reserves, mostly local militia, but they too were ruined and finally he decided to admit defeat and call off the attack. However, heroically but tragically, just because he had had enough, did not mean the hard fighting highlanders of the Black Watch had. They refused to retreat and continued trying to push on, finally charging forward, they alone managed to reach the foot of the outer walls of Fort Carillon but those who tried to continue ran into French bayonets. When there were finally none left to carry on, the battle came to an end.

Ultimately, the Battle of Fort Carillon would prove to be the most vicious and bloodiest battle of the French & Indian War. The British lost nearly 3,000 men dead, wounded or missing. The heroic highlanders of the Black Watch lost more than half of their entire number. The French, on the other hand, lost only a little over 600 men, the vast majority of them wounded rather than killed. It was the greatest victory in the military career of the Marquis de Montcalm and would never be surpassed. Abercrombie, by contrast, would never command an army in the field again. The British offensive had been stopped cold and with bloody losses, bringing about a change in command, however, the overall situation did not change at all. The British continued to make North America the main focus of the war, the French would provide precious little support to their own forces in the region and Montcalm would go on fighting against the odds until his life and French rule over Canada both came to an end. Because of a lack of resources and defeats elsewhere, the French would later abandon Fort Carillon, leaving it to be occupied by the British who renamed it Fort Ticonderoga. It would remain in British hands until the outbreak of the American War for Independence.
Posted by MadMonarchist at 11:28 AM