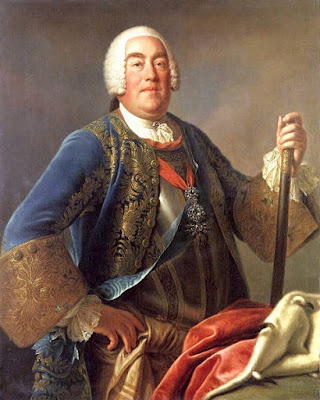 The history of the last of the Polish monarchs is generally a tragic one and the reign of Augustus III, the penultimate King of Poland, was an example of this. He, like others of this period, often comes under considerable criticism and yet, there should be room to have some sympathy for these monarchs in the last years of life of the old Kingdom of Poland. They were given a heavy responsibility, ruling a fractious country with no defensible borders surrounded by three powerful monarchies, Romanov Russia, Hohenzollern Prussia and Habsburg Austria, which all sought the elimination of Poland as an unnecessary complication to their ambitions. Yet, the Polish kings were given no tools with which to deal with this dangerous state of affairs, occupying a position in which they had no incentive to make long-term plans since the kings of Poland were elected and someone of another house would likely succeed them, their powers were curtailed and their populace was extremely divided. 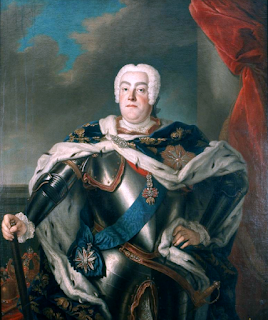 The position of the Polish monarchs, at this late stage, was not entirely dissimilar from that of the Roman Pontiffs prior to the unification of Italy. They could, at times, achieve a degree of national unity in pursuit of a common goal, but there were always nobles who were willing to align themselves with the Austrians, Prussians or Russians in order to further their own aims and thus undercut the cohesion of the country overall. The kings themselves, because their position was so insecure, were also invariably forced in this period to align themselves with foreign powers, again, rather like the Roman Pontiffs shifted back and forth in alliances with the French or Germans in order to maintain their position and block the moves of other competing states. King Augustus III of Poland was no different, he too had to have foreign support and, like others, found this foreign support to quite often be as unpleasant as it was necessary.

Augustus III was born on October 17, 1696 in Dresden in the Electorate of Saxony, a member of the House of Wettin which once reigned over many countries and still reigns today over Belgium, the United Kingdom and British Commonwealth Realms. His father was Augustus II, nicknamed “Augustus the Strong” who is today most remembered for his huge number of illegitimate children, some putting the number of his offspring in the hundreds. Augustus III, however, was his only legitimate son and would, like his father, one day become Prince-Elector of Saxony, Vicar of the Holy Roman Empire, King of Poland and Grand Duke of Lithuania. He was brought up for this purpose and, as his father had done earlier, this required his conversion to Catholicism in 1712. The Electors of Saxony had been Protestants all the way back to the days of Martin Luther and this caused considerable outrage among the Saxon aristocracy as well as an effort by Prussia and Hanover (whose Elector was also the British monarch) to deprive Saxony of its leadership of the Protestant caucus in the Reichstag (the princely upper house of the Imperial Diet or parliament of the Holy Roman Empire of the German Nation) but the Prussians and Hanoverians were unsuccessful. 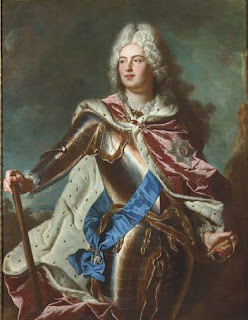 In 1733 King Augustus II died and Augustus III succeeded his father as Prince-Elector of Saxony (as Friedrich Augustus II). His election as King of Poland and Grand Duke of Lithuania was expected but not a forgone conclusion. For that, he would require foreign support. The Russians backed Augustus III as King of Poland, which was not too surprising but the Austrians did as well. Of course, the German Reic
h (HRE) as a whole did as well, which was also not surprising, favoring a German monarch on the Polish throne but the specific backing of the Austrians, which is to say the House of Habsburg, was a matter of political bargaining. The Habsburgs were anxious to secure their own position which was endangered by the fact that the last Emperor had only a daughter, Maria Theresa, to succeed him and tried everything from backroom deals to outright bribery to gain support for his “Pragmatic Sanction” by which the German princes pledged to support Maria Theresa.

The danger, of course, was that the German lands would fall into the same pattern of civil war and dynastic infighting which later befell Spain during the Carlist Wars in a similar situation. Augustus III agreed to support the Pragmatic Sanction and thus won the support of Emperor Charles VI for his election to the Polish throne. Likewise, his promise to support the Russian claim to Courland by the Empress Anna, ensured that he had Russian support for his election as well. It also helped that he had, in 1719, married Archduchess Maria Josepha of Austria, daughter of Emperor Joseph I which also helped win over the Habsburgs. On October 5, 1733 the Polish electors gathered and Augustus III was elected King of Poland and Grand Duke of Lithuania. However, he was still faced with a problem as there was already a King of Poland to deal with and a Polish one at that in the person of Stanislaw Leszczynski (King Stanislaus I). He had widespread support in Poland and had fought Augustus II for control of the country. When Augustus II died, he returned with French support to reassert his rule. The Russians and Austrians feared an alliance between the French, Poles and Swedes and so backed Augustus III against him. 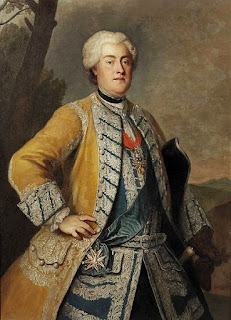 King Augustus III was crowned in Krakow early in 1734 but, though he had basically won the War of the Polish Succession by 1736, still had to deal with pro-Stanislaus insurgents until 1738. Obviously, all of this made Poland a rather unattractive place to King Augustus III and it is estimated that he spent no more than about three years of his entire reign actually in the country. The local government was usually deadlocked by feuding between the Czartoryski and Potocki families and the King delegated most of his duties to his viceroy in Poland, Heinrich von Bruehl. However, unlike many other monarchs, King Augustus III was true to his word in agreeing to the Pragmatic Sanction with the House of Habsburg and when Maria Theresa came to the throne of the Habsburg lands, he backed her in the War of the Austrian Succession in 1742 (King George’s War in America) though Poland was not heavily involved. He also remained loyal to the Austrian Empress in the Seven Years’ War of 1756 (the French & Indian War in America) though, again, Poland was not heavily involved.

In his personal life, no one could accuse King Augustus III of not doing his duty to secure the succession, at least in Saxony, as he and his wife produced sixteen children which included daughters who would be married to the future King of Spain, Dauphin of France and Elector of Bavaria. However, on the whole, history has not been kind to King Augustus III and not always fairly so. His reign over Poland is usually described as one of an absent monarch who impoverished the country in order to enrich Saxony and who was far too deferential to Empress Elizabeth of Russia. Not all of the accusations against Augustus are unfounded, Poland certainly had happier periods in her history, but the factions in Poland who opposed him often smeared his reputation with falsehoods or exaggerations. A notably example being the oft-repeated story that the King could not speak Polish which is certainly untrue. We know for a fact that the King could speak Polish, as well as French, Latin and possibly Russian along with, obviously, German. 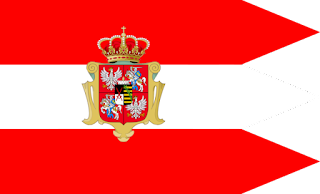 King Augustus III was noted in his own time for making Polish food popular in German and then wider parts of Europe, for introducing coffee to Poland and for furthering education of the Polish elite by bringing them to Saxony to attend university there. Unfortunately, (as a matter of opinion) this resulted in a whole crop of powerful, young Poles soaking up the latest fashionable trends of the so-called “Enlightenment” which they eagerly brought back to Poland with them when they returned. He was also a noted patron of the arts, nonetheless, his reign saw an increase in civil unrest within Poland and increased the trend of Poland, with its many feuding factions, being ever more at the mercy of Austria, Prussia and Russia. King Augustus III died in Dresden at the age of 66 on October 15, 1763, leaving behind a still fractured Kingdom of Poland which was not long to survive.
Posted by MadMonarchist at 2:00 PM