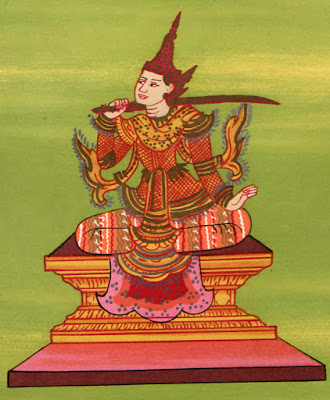 The Kingdom of Burma has had a long and colorful history with more than one high point over the centuries. The Burmese, for one relatively short period, even dominated the entire Indochinese peninsula. Although he did not reach that height, one of the most successful and most celebrated monarchs in Burmese history was King Tabinshwehti. His victories were mostly confined to what is Burma today though he also, inadvertently, played a part in uniting the Thais against the power that he represented. He was extremely significant in reuniting his country and laying the foundation for future success and is still quite revered, even worshipped, in Burma today so great was his impact on the public imagination. He certainly ranks among the most famous Burmese kings of all time. He was born on April 16, 1516 at Toungoo Palace (named for the Toungoo Dynasty of which he was a member) to King Mingyi Nyo and his concubine Khin Oo. The King was 56 and was overjoyed to have a son and heir, immediately naming him crown prince and raising his mother from the status of concubine to queen.

It was a time of intense struggle for Burma as the country had been locked in a seemingly endless series of civil wars for decades. Additionally, a great deal of hope and many aspirations rested on young Tabinshwehti as it was believed he was the fulfillment of a prophecy about his great-great grandfather Crown Prince Minye Kyawswa who was famous warrior predicted to be reborn to lead his people to greatness at a time of great crisis. As Tabinshwehti was believed to be the fulfillment of this prophecy, his education emphasized the martial arts and in 1525 he saw combat for the first time in the (failed) month-long siege of Toungoo. At the time, his state was still a small one but its population was growing rapidly as wars and invasions of Upper Burma caused a great many Burmese refugees to flood into the city, particularly after the fall of Ava to the Shan confederation in 1527. Tabinshwehti succeeded to the throne of Toungoo on November 24, 1530 at the age of 14 upon the death of his father King Mingyi Nyo.

When the Shan captured the city of Prome in 1532, an ally and just across the river from a Toungoo city, King Tabinshwehti decided to go to war to unite Burma under his leadership, beginning with an attack on the Hanthawaddy kingdom south of Toungoo. This was the largest city-state of the many which grew up in the aftermath of the fall of the Pagan Kingdom of Burma and being located on the coast was very wealthy as a center of trade. This made it an attractive target but also a difficult one and the war would last from 1534 to 1541. Initials attacks were unsuccessful so the Toungoo resorted to subterfuge to spread division and distrust in the enemy camp. This tactic was highly successful, causing the Hanthawaddy leadership to turn on each other and many of their most accomplished ministers were executed on suspicion of being disloyal. This sufficiently weakened the Hanthawaddy for the Toungoo forces to win a stunning victory over them at the Battle of Naungyo despite being outnumbered. This gave Toungoo a great deal more wealth and power and caused many of the other leaders of the region to come on side and pledge allegiance to King Tabinshwehti.

With most of Lower Burma under his control, King Tabinshwehti sent an ultimatum to the last holdout, Martaban, in 1540. When Martaban refused to submit, Tabinshwehti attacked. Again, the offensive was initially unsuccessful. Martaban was reinforced by Portuguese mercenaries who led the defense of the city and Portuguese ships provided the backbone of the naval defense as well. This was a significant advantage as, in those days, the Portuguese were highly sought after in Southeast Asia for their advanced weapons and military knowledge. Any ruler who wished to be powerful would usually have some Portuguese in his employ. However, after months of frustrated attacks on land, the Toungoo fleet finally broke through the seven Portuguese ships in the harbor and Martaban fell, the city being pillaged for three days. As the defenders had refused to surrender, King Tabinshwehti had them massacred and this caused a great many others in the neighborhood to fall into line rather than risk a similar fate.

All of Lower Burma was now under the control of Tabinshwehti as well as access to the sea, trade routes and the money to employ his own (usually Portuguese) mercenaries and their modern weaponry. At this point, he turned his attention back to Upper Burma and the city of Prome, launching an offensive against it on November 19, 1541 after the end of Buddhist Lent. After pushing the defenders and their allies inside the city walls, the Shan Confederation forces arrived under King Thohanbwa but they were unable to break through the Toungoo lines. More reinforcements were called for but Toungoo forces ambushed them and wiped them out, leaving Prome isolated. Finally, on May 19, 1542 King Minkhaung surrendered Prome to King Tabinshwehti. This victory greatly alarmed the Shan Confederation and they assembled a massive invasion force from across the seven states to crush Toungoo once and for all. Despite having the larger army, they were unable to defeat Tabinshwehti who had a respectable and veteran force of 12,000 troops, a 9,000-man flotilla and Portuguese weapons and mercenaries. After a month of combat, the Shan forces retreated and the Toungoo gave chase, expanding their reach all the way to old Pagan (or Bagan).

With the former capital now his, Tabinshwehti held a formal coronation for himself as the new King of Pagan, effectively, what we would today consider a coronation as King of Burma. He did not control quite all of Upper Burma but the city-states which remained aloof were in no position to challenge him. Instead, he chose to direct his forces against the Kingdom of Mrauk-U, starting with the state of Arakan in 1545. The war would last until 1547. Again, the first attack failed, the second was more successful but Mrauk-U was able to just barely hold on by flooding the area to drive out the invaders. In the end, the two sides agreed to a negotiated end to the war, King Tabinshwehti withdrew his forces and peace prevailed for the next three decades. His attention was already shifting beyond the border to Siam after Tavoy was occupied by the Siamese in early 1547 (in a region claimed by both sides). This resulted in the first Burmese-Siamese War of 1547 to 1549, not long ago brought to the big screen with the Thai film, “The Legend of Suriyothai” in which, of course, King Tabinshwehti is portrayed as the villain.

Unfortunately, for those who like to see a clear moral cause behind every dispute, this conflict depends entirely on which side you are on as to who is in the right and who is in the wrong. For Burma, the Siamese attacked and captured their city of Tavoy and King Tabinshwehti retaliated. For Siam, this city already belonged to them and the Burmese were simply exploiting a time of internal conflict for the Kingdom of Ayutthaya to expand the Toungoo empire. In any event, even with his very talented chief lieutenant Bayinnaung leading the way, this war was not a success for King Tabinshwehti and the Siamese successfully repelled his invasion, Queen Suriyothai famously dying in the climactic battle. It was not, however, a catastrophic defeat for the Burmese and they would be back before too much time had past under Bayinnaung. That, unfortunately for him, would not be a victory that King Tabinshwehti would live to see.

The King had always lived a very active life, had survived many battles, married many wives and never suffered from much in the way of poor health. Yet, that all changed when a Portuguese mercenary in his employ introduced him to a little thing called alcohol. From his first taste of Portuguese wine, Tabinshwehti was hooked and quickly became an alcoholic and his health rapidly deteriorated. Rather than fighting, the mercenary in question became the King’s exclusive source of wine and the two basically partied all the time. The King stopped going to war, stopped running the country and even gave his wine maker a Burmese court lady as a wife. Government officials tried to get Bayinnaung to step in and take the throne but, because of his great respect for and loyalty to King Tabinshwehti, he would not. He did, however, pay off the mercenary and send him home. Sadly, not everyone was so loyal and on April 30, 1550 the King was beheaded while sleeping in his tent by two assassins. According to his will, the very capable Bayinnaung succeeded him as king but the Toungoo empire quickly fell apart without his leadership. King Bayinnaung would have to start over, putting it back together again, which he did, ultimately leading Burma to its period of greatest territorial expansion in the years to come.

Despite his sorry end, King Tabinshwehti had achieved a great deal for Burma and is still highly revered to this day, regarded as a saint or a sort of god, one of 37 in the Burmese national pantheon. He is famous for being a great leader, a successful warrior, a courageous man who started his campaign of conquest by attacking the strongest rival rather than the weakest. He united almost all of Burma under his leadership and laid the foundation for the even greater victories that would come after him, a period in which Burma would dominate everything between India and Vietnam. Ultimately, King Bayinnaung would accomplish more in terms of territorial expansion, yet none of it would have been possible without the campaigns of King Tabinshwehti. It is thus entirely fitting that he should be a hero of Burmese history and an example of what great heights Burma is capable of achieving.
Posted by MadMonarchist at 4:19 PM