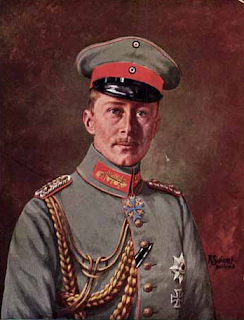 Yesterday, during the day, I decided to check Facebook on my phone. I had to log-in again and was told that a post of mine had been removed for “violating community standards”. I was warned that my page could be deleted if this sort of atrocity happened again. Before being allowed to continue logging-in I was obliged to review the “community standards”. No big deal, right? In the grand scheme of things, no, but it did infuriate me as the sort of petty tyranny common in tin-pot dictatorships. I was annoyed because it first took a while to find out exactly what post had been removed. Finally, I found out it was a picture, since needless drama long ago convinced me to limit my Facebook activity to posting royal pictures and little to nothing else, and that picture was a World War I postcard of German/Prussian Crown Prince Wilhelm. I include, at great risk of causing offense it seems, the picture here so that everyone can see what was so atrocious as to warrant my being singled out for a severe reprimand and threat from Mr. Zuckerberg. Take a good look at it. -->

Now, if you are like me (and if so, you have my sympathies), you may be wondering just what it is about this picture that was offensive. You see, that is another part of the problem that makes this infuriating. FB will tell you, after some clicking around, what image is the cause of your misfortune, but they will not tell you exactly what about it is offensive. So, what is the point of the warning? How can you take care to never do wrong again if you do not know what you did wrong in the first place? I have seen some pictures of the Crown Prince that I could imagine someone complaining about; pictures of him in his NSKK uniform which many mistake for a Nazi Brownshirt outfit or pictures of him in his regimental “Death’s Head” Hussar uniform which some have mistaken for an SS uniform. As you can see, this is neither of those. This is a standard Imperial Germany army uniform for general officers. The only thing I could possibly come up with is the Iron Cross he is wearing. It doesn’t make sense but that is the only thing I could imagine that would be even recognizable to the public. Is the uniform that distinctive? The Order of the Black Eagle Star? How many could even recognize the Crown Prince himself?

It would of course be so much easier if FB would say, explicitly, what rule it was that I violated with this picture. But they don’t. They tell you to review their “community standards” none of which include anything explicit about what is not allowed to be posted. There is a lot of vague talk about being nice and promoting “diversity” (whatever that means) but it is all exactly that; *vague*. There is nothing concrete, nothing specific. I can only assume, since they will not tell me, that it was the Iron Cross medal that was the problem based on the fact that it was later used during the Nazi period and, since the swastika has been banned in so many places, the Iron Cross is often used to replace the swastika in artwork about the World War II period. It is not that different from the way that some have started to call for the banning of the old Imperial German ensign since many neo-Nazis took to displaying it since their beloved Nazi flag is outlawed. As such, many of the symbols of Imperial Germany are now seen as being synonymous with Nazi Germany even though they long pre-date the Nazi era. The Iron Cross, for example, originated in the 19th Century during the Napoleonic Wars. 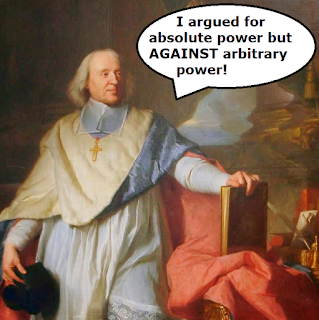 Now, again, I could be wrong about what the actual problem with the picture was but divining that is made even more difficult due to the fact that whatever these vague “community standards” are, they are not consistently enforced. It is entirely arbitrary and depends on what gets reported and who is doing the reviewing. This is a perfect example of the distinction I have often pointed out that Bishop Bossuet talked about in his defense of absolute monarchy from a Catholic, Biblical basis. He argued for absolute power but made a distinction between absolute power and arbitrary power. A monarch, Bossuet argued, should have absolute power but no one should have arbitrary power as that would mean that no one is ever safe, no one would ever know if they are in compliance or not. Similarly, FB is, as the left with their selective support for private property and big business, never tires of pointing out, is a private entity and as such has absolute power over what is or is not allowed on their site. I have no problem with that. What I do have a problem with is their vague and arbitrarily enforced “community standards” that make it next to impossible to know what exactly is or is not allowed.

You see, there are a number of other pictures I have posted that, assuming someone mistook this picture of the Crown Prince for something Nazi-related, that one would think would be more likely to violate “community standards” than this one. I have posted a few pictures of German princes in Nazi-era German army or air force uniforms. I have posted a picture of the sultans of Malaysia alongside a Japanese general who was (quite unjustly) executed as a war criminal. Yet, for some reason, nothing was said or done about those but a picture of the last German Crown Prince is deleted. Likewise, I have posted a number of pictures of German royals wearing one or more Iron Crosses. These were awarded fairly freely in the Napoleonic Wars, the Franco-Prussian War and World War I before the Nazis ever came along and since most German princes served in the military, German monarchs and princes in uniforms with this decoration are extremely common.

There is an agenda at work here, though I doubt traditional, overt reactionaries are significant enough to be on their radar, and that is why this has to be arbitrary. So, for example, FB or Twitter could not ban the swastika completely or else they would have to ban all the left-wing accounts that put swastikas on Donald Trump or Marine LePen. The left actually was confronted this problem when everyone in the United States started banning the Confederate flag. Some leftists started to complain because they wanted to buy a Confederate flag to take to a street demonstration to burn it and trample on it to show how virtuous they are, but found out it was no longer so easy to get a hold of. You may have noticed the same thing regarded accusations of racism. Not all that long ago it was the left that said they wanted a “colorblind” society, because race was just a “social construct” after all but now, they are saying that it is racist to say that you are colorblind or deny that race is real because they actually do want policies that favor one race over another so long as it is the race that supports them. So, it’s only racist, sexist or in any way offensive when one side does it but not when they do it. Hence, the new rule of liberalism is that their power must be arbitrary. 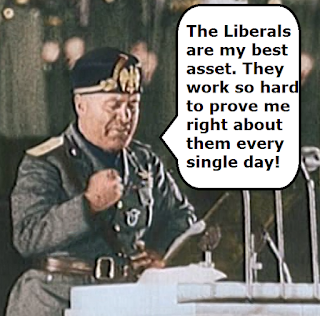 As I have mentioned many times before, this is where the “Anti-fascist” crowd is working every day to prove the original Fascist, Mussolini, right in what he said about the Liberals. He said that they love to talk about freedom, liberty and rights but that these wonderful things are only for them and their supporters, not for their enemies. It has become so blatant and so common these days that even the mainstream, milquetoast conservatives are starting to take notice. The mask is coming off, I think because the left is so outrage-driven that they have worked themselves up into a frenzy so that, as Mark Steyn recently said, “You’re Hitler, I’m Hitler, everybody’s Hitler”, they know nothing about history or any subject really, all they know about Hitler is that he was a bad guy and anyone who is not one of them must be Hitler. They get offended, they go straight to Hitler, no passing “Go” and no collecting 200 dollars. Free speech? Sure, free speech for them to call you a Nazi but no free speech for you to say you would like to enforce immigration laws or post a picture of the German Kaiser’s firstborn on Facebook. Free elections? Sure, free elections so long as their side wins. If not, have the people vote again until they give the “right” answer. Freedom of association? Sure, if you are in the fashion business and don’t want to dress Melania Trump, that’s fine. But if you’re in the wedding cake business and don’t want to bake a cake for the lesbian biker couple down the street, your life is as good as ruined. It’s becoming more clear everyday and I hope more people start to wake up and come to their senses because it is making me a very, …Mad Monarchist.
Posted by MadMonarchist at 2:06 AM