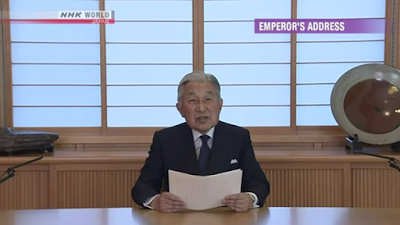 Today, His Majesty the Emperor of Japan made a special address to the nation (read the English text of the speech here). This is only the second time that His Majesty has addressed the Japanese public directly and it is only the third time in history that such a thing has been done. Obviously, this was important. His Majesty explained the situation and the context of his remarks very succinctly and well. He is concerned about his advanced age and his health, assuring everyone that while his health is currently good, he does feel his age and is concerned that he will not be able to devote himself to all the duties of being emperor as he would like. The Emperor did point out that he cannot, himself, ask for anything to be done about this or make any suggestions. That was a reference to the much talked about issue of abdication, something which was once extremely common in the Japanese monarchy but which has not been done since before the time of the Meiji Restoration. The problem is that the current Japanese constitution contains no provisions for the abdication of an emperor and so His Majesty the Emperor cannot legally abdicate nor can he express a wish to as this would be seen as a political statement and the Emperor is not allowed, by the constitution, to have anything to do with government or politics or to express any opinion on political subjects.

Because of these restrictions, the Emperor could only indirectly address the issue at hand by pointing out his own concerns about his age, health and ability to carry on his duties as emperor and trust in the government, currently led by conservative Prime Minister Shinzo Abe, to pass the laws needed to allow the Emperor to abdicate or for the appointment of a regent to take up his duties on his behalf while he remains emperor for the remainder of his life. The idea of a regency is one that has a more recent historical precedent. The current emperor had to take up the official duties of his father and the very end of the reign of HM the Showa Emperor and the Show Emperor, then Crown Prince Hirohito, had a rather lengthy period as regent for his father the Taisho Emperor. Farther back, however, before the Meiji era, abdications were so common as to be more the rule rather than the exception. Many Japanese emperors reigned for fairly short periods before abdicating and enjoying a life of leisure. That seems like a different world from the State of Japan today. However, it would be wrong for anyone to be dismissive about the duties and responsibilities that the Emperor of Japan must fulfill.

The most important obligations for the Emperor of Japan is certainly the religious duties he has to perform as the highest chief priest of the native Shinto religion. These can involve quite lengthy and elaborate rituals which only the Emperor can perform and, in recent times, His Majesty has confessed that he has lately made some mistakes while performing these rituals because of his advanced age. In the past I have also pointed out that the Emperor is probably the only monarch whose official duties include farming. He must plant and harvest his own rice field on the Imperial Palace grounds, this special rice then being used for sacred Shinto ceremonies which call for such offerings produced by the Emperor himself. Obviously, this is not a duty which becomes easier with advanced age. There are also the very numerous visits, meetings, receptions for foreign dignitaries, state dinners, trips abroad to foreign countries and the issuing of documents related to the opening and closing of the parliament which most any monarch would find familiar. Throughout his reign, the Emperor has performed all of these flawlessly but is concerned that he must cut back his schedule these days due to his age.

The basic situation is that the Emperor feels it is unfair to his people for him to carry on in his imperial duties if he can no longer give 100%. In subsequent remarks, Prime Minister Shinzo Abe said the government would be seriously looking into the matter. So far, any Japanese government has been reluctant to deal with any issue concerning the monarchy. Those on the right being rather fearful that those on the left will try to introduce unwanted innovations into the ancient institution, particularly female succession, which would mean the end of the male-line that stretches back to traceless antiquity. However, for the Emperor to take the initiative to record an address such as this shows how important he feels the issue is and the government cannot simply ignore or indefinitely postpone the matter, particularly considering that the conservatives now in power have been pushing for constitutional reforms which would include restoring the Emperor officially to the position of Head of State and placing the Emperor above the constitution rather than being subject to it.

Given how the government of Japan operates, we can be sure that there will be no changes immediately. We may see, in the future, legal measures taken that will allow His Majesty to abdicate or for HIH Crown Prince Naruhito to step into the part of regent on behalf of his father while the Emperor enjoys a quiet retirement for the remainder of his years, which he certainly deserves. Personally, I am not, as I have often said, very fond of abdications but in the case of Japan it is not unprecedented and if it must happen, I would prefer it happen while Abe and his coalition are in power rather than someone else.
Posted by MadMonarchist at 11:44 PM