Great Christian Monarchs, Not So Long Ago 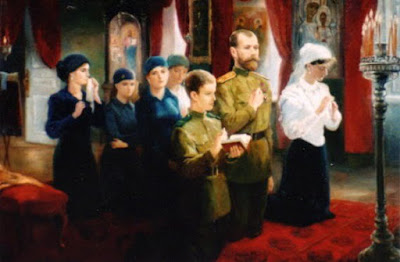 Today, anyone would be forgiven for regarding Christianity in Europe as a lost cause. The number of people who are active Christians has declined dramatically, particularly since the 1960's, in many countries the majority are atheists and the fastest growing religion is Islam. Even where Christian churches still operate, one would have to be fairly generous to call them actually "Christian" at all. In The Netherlands, the largest Protestant church group claims only 8.6% of the population and even among those, nearly half have said they do not believe God exists and 1 out of every 6 members of the clergy are atheists! In Britain, the Church of England announced not long ago that it would be closing down many rural parishes other than for Christmas and Easter due to lack of worshipers. In the Kingdom of Spain, once the strongest bastion of Catholicism in Europe, while 92% are officially members of the Catholic Church, only 3% regarded religion as one of their most important values. Obviously, things are not what they used to be and this has affected monarchies and republics alike. However, the 'last stand' of traditional monarchy, in a way at least, the First World War, shows us that strongly Christian monarchs were not at all uncommon even in those days.

In Great Britain, King George V would not have seemed too religious compared to some other monarchs but that is mostly because he was not the sort of man to let such things show very easily. He was, unlike his own father but very much like his grandmother Queen Victoria, a faithful husband who took his marriage vows seriously. He had a faith in God that can be seen in his private letters, particularly during times of great difficulty. Queen Wilhelmina of The Netherlands, was a monarch of very sincere faith, even if many did not know the extent of it until after she was gone from reading her autobiography, written at the end of her eventful life. Grand Duchess Marie-Adelaide of Luxembourg, on the contrary, was widely known from the start for being an ardently faithful Catholic. One of her first acts as Grand Duchess was to refuse Royal Assent to a bill that would have removed Catholicism from the schools. After being (quite unjustly) forced to abdicate after the First World War she joined the Little Sisters of the Poor in Italy. King Albert I of the Belgians was another such monarch, a very sincere and devout Catholic whose faith permeated every aspect of his life. He often spoke of a life in the service of God as being the greatest calling of all and impressed upon his children the importance of their Christian faith and that disaster had always befallen those peoples who turned away from God.

Among the other monarchs of the major Allied powers, King Victor Emmanuel III of Italy has often been labeled as less-than seriously religious. However, rather like George V, he was not a man who was very easy to understand. In fact, he was a faithful husband (unlike his predecessors) and a practicing Catholic who would challenge anyone who expressed anti-clerical views in his presence. It is true though that there was difficulty in overcoming the decades of unfortunate animosity between the Church and State in Italy. His wife, Queen Elena, was a Catholic convert and had all the zeal of a convert so that she currently has a cause for canonization underway today. One can notice something of a history in the House of Savoy of royal spouses becoming saints. And, of course, no monarch in the ranks of the Allies has had his piety so publicly recognized as Czar Nicholas II of Russia, recognized as a "Passion-bearer" by the Russian Orthodox Church. Czar Nicholas II, like the others mentioned, was a faithful husband and a more extremely devoted husband and father than most. Here again was a man whose sincerity of faith was on display in everything he did and, for a man often criticized for indecisiveness, was one think in his life that he was, to the very last, absolutely unshakable on. Prayer and the Orthodox Church were pillars of his life and reign and he did nothing without them, even to the ultimate end of becoming a martyr with his family for them. Given the political situation as it was and has been in Russia, Nicholas II has been criticized and vilified more than most and yet, it says something that even his worst enemies have been forced to admit that the last Czar was a devout and godly man, a faithful husband and father without blemish.

On the side of the Central Powers, Christian monarchs were certainly not lacking either. However, in the case of at least one, that fact might take many by surprise. Very few people are the slightest bit aware of what an openly devout Christian the German Kaiser Wilhelm II was. It is something that is almost always left out of any discussion of the man. Could this be intentional? If one were to go back in time and meet the last King of Prussia, it is probably what would stand out the most. Like the Czar, he had his youthful indiscretions but by the time he married had become a more serious Christian and his life with Kaiserin Augusta Victoria only strengthened that. She was extremely devout as well and the two often prayed together in times of difficulty (which there was plenty of). It is interesting to note that one of the biggest "warning signs" about Hitler and Nazi Germany that the Kaiser noted was the lack of any real bond with Christianity. His fellow Kaiser, Emperor Francis Joseph of Austria, is a case that almost goes in the opposite direction. Whereas most have no idea how staunch a Christian the German Kaiser was, many assume that the Kaiser of Austria had a better relationship with the Church than was actually the case. He had his personal failings of course and was a source of strength for the Church to be sure but relations between the two were not always cordial. He earned papal criticism for violating the territory of the Papal States and earned quite a push-back from Pope St Pius X after he came to the Throne of St Peter following Francis Joseph using his imperial-veto to block the candidate that was originally elected. After that, this special privilege was revoked.

Still, those disagreements were invariably of a political nature and Emperor Francis Joseph was always unwavering in his support of Catholic doctrine and very aware of his duties and responsibilities as a Catholic monarch. He was a staunch Christian and his sincerity only increased with time (and that was a lot for someone as old as he came to be). It was his nephew and successor, Emperor Charles I of Austria-Hungary, who would gain the most recognition for his devout Christian faith. Again, for Charles, it was something strengthened by his family life, something he and his wife, Empress Zita, had in common and worked to instill in their children. They were devoted to each other and helped each other in their devotion to God. You can see his deep Christian faith on display throughout his life and his short reign on the Hapsburg thrones. His effort to make peace may have been ill-advised and doomed to failure, but the fact that he made it at all says much about his character. No one who knew Emperor Charles could not but come away impressed by the sincerity of his devotion to God and this faith sustained him in the time of his exile. The Catholic Church has never made a habit of canonizing monarchs (though it has certainly happened much more often than for presidents, which is 'never') and it says much as well that even in the very anti-monarchy early 21st Century that Emperor Charles would be beatified by Pope John Paul II in 2004. When the Catholic Church wished to hold up to the world an example of Christian leadership in the political sphere, they held up a Hapsburg monarch.

Cases such as the last Czar of Russia or Emperor of Austria may be well known but for the others, sadly, their very open and devout Christian faith is all too often ignored. This should not be the case and, as can be seen, such faith, while not universal, was certainly not a rare exception. Today it can often seem like Christianity is banned from the halls of power, and often times it actually is, but it is then all the more important to remember that this was not always the case and it was not the case not all that long ago. Today, future monarchs are being raised in an environment very hostile to Christianity but even now there are still faithful Christians among the monarchs of Europe, even if they are not allowed to be very open about it. What is important, I think, to take away from all of this is our own responsibility. If we want God to give us good, Christian monarch as in days past, we might first try becoming a good, Christian public or at least aim to make an effort at such similar to how our forefathers did.
Posted by MadMonarchist at 6:53 PM