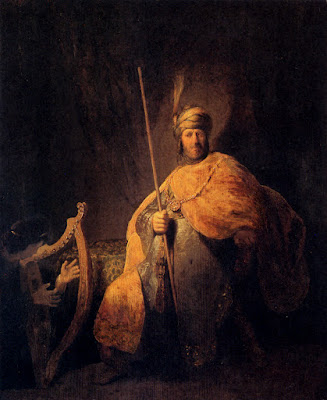 Although there has been some debate over the correct translation of titles such as king, chief or prince, the man recognized as the first King of Israel was Saul who ruled, roughly, from 1020 to 1000 BC. Due to the immense space of time that has elapsed since the reign of King Saul, much about him remains a mystery. We do not know exactly when he was born or even where exactly he was from. All we know is that he was from an unnamed town in the lands of the tribe of Benjamin. The primary source for information on his life is the First Book of Samuel. Saul was considered a Judge of Israel and was most known for being a great and accomplished warrior. He is portrayed as being somewhat similar to past Judges of Israel who also had a bit of the Prophet about him in that he was moved by God to do certain things. When the Ammonites attacked Jabesh-gilead in the Trans-Jordan, Saul felt compelled by God to take action and gathered together an army of Israelite warriors to defeat the Ammonites, one of his many military accomplishments. When the people of Israel began to demand a king to lead them, someone like Saul would have been a natural choice. 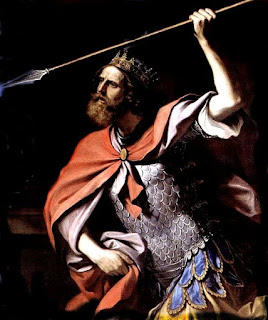 That choice, however, remains a controversial one. Even today, many defenders of republicanism point to the warnings the Prophet Samuel made in response to the public outcry for a king as a divine condemnation of monarchy, ignoring the huge accumulation of Biblical texts glorifying the monarchy and calling for obedience to the kings. However, the things that Samuel warns will happen to Israel under a king are things that would apply to any central government of any kind. It is also impossible to overlook the fact that there was some politics involved in all of this as Samuel represented the class of religious rulers who were about to lose power in the shift from theocracy to monarchy. Samuel was admired and respected but he was getting old and his sons, who we assume by this were viewed as possible successors in his pontifical role, were not as well regarded as he was. So, the people wanted a king to rule them and it is only natural that this would be met with some resistance by a Prophet like Samuel who had effectively been their ruler as the one looked to as the vicar of God for the people of Israel. Nonetheless, Samuel anoints Saul King of Israel.

It should be remembered that, according to the Scriptures, it was God who directed Samuel to anoint Saul King of Israel and this must be seen alongside the Prophet’s warnings about having a king. As God directed Samuel to anoint Saul, one is left with one of two options; either God was persuaded to participate in something that was wrong (not very omnipotent) or this was all according to a divine plan from the start. Obviously, the second would seem to be the obvious choice and, at the outset, Saul seemed to be the very embodiment of an ideal monarch. He is described as being strong, handsome, very tall and dedicated. He was also successful in the initial task which was to deliver Israel from the domination of the Philistines. After some initial victories against them, King Saul also won victories over virtually all of the enemy nations that had been plaguing the Israelites while throughout his life the on-going war with the Philistines continued to rage. He was, in short, a very adept and successful warrior king who had delivered his people from their enemies and put them back on the offensive. However, he fell out of favor rather quickly in an odd way.

According to the Biblical account, the “crimes” for which King Saul lest divine approval appear to be what most people would consider trivial offenses (offering a sacrifice at Gilgal when Samuel -who was late- was supposed to do it) or something which most today would consider laudable; he showed mercy to his enemies and refrained from killing the Amalekite King Agog. God, through Samuel, had ordered King Saul to show no mercy, to take no prisoners and massacre the Amalekites to the last man and the last animal. King Saul, however, spared the king’s life and the best of his livestock (rebuked, he later did put King Agog to death). This has caused some historians to speculate that his later downfall at the hands of the Philistines was taken as a sign that God had abandoned him and these other issues were pointed to after the fact as a way to justify finding another monarch to take his place. Again, however, that is speculation as there is only the Biblical account that we have for information relating to King Saul, an account which tradition says was written by Samuel who would seem to be less than well-disposed toward Saul from the start. He first had to yield power to him and later the relationship between Saul and Samuel deteriorated ever further.

Throughout the rest of the scriptures dealing with King Saul he is portrayed as a fallen hero rapidly becoming a paranoid tyrant. He was constantly fighting battles with the Philistines, was becoming ever more antagonistic toward Samuel and falling ever farther from God’s favor. The young David was chosen by Samuel as the “true” monarch that God preferred and sometime after Samuel passed away. King Saul was thus also worried about a young rival in the person of David and tried, unsuccessfully, to kill him. His fears increasing, King Saul turned in desperation to the witch of Endor to conjure up the ghost of the dead Samuel. This brought him no comfort and was also a violation of God’s wishes and his own law by which he had earlier expelled all sorcerers from the land. When King Saul made war on the Gibeonites, when God had not ordered such an attack, a famine fell on the land for three years as punishment and David, who had refrained from killing Saul when he had the chance (as he was God’s anointed), had seven sons of Saul’s family executed. All of this was done, we are told, as retribution for King Saul turning away from God but it also helped secure the future throne of King David for his own dynasty, eliminating potential rivals.

So much of King Saul remains a mystery and views about him widely differ. The given narrative seems rather confusing and even as a good man turned bad narrative, there are always pieces that do not quite fit. One could easily read the Biblical account and come away viewing King Saul as a good man who was being picked on by a capricious deity. He was chosen for a position he did not seek, then admonished for defending that position when another was picked to replace him. He was punished for showing mercy to one enemy and later punished for not showing mercy to another. At times, he seemed to repent and admit his own faults but was not granted forgiveness. We do not know how long his reign lasted, the traditional dates being obviously incorrect, and as such it is hard to know exactly how much he did accomplish. Was his reign a short two years of constant violence or a longer period in which Israel reaped some calm and quiet from his victories? We will never know for sure. We know his end was a violent one but it is also mysterious given how his successor, King David, reacted to it.

King Saul was defeated in his last battle with the Philistines and, after being badly wounded, asked his aides to take his life. When they refused, he killed himself. His body, along with his sons, were put on display on the walls of Beth-shean but were rescued for burial by a raiding party of men from Jabesh-gilead. For a man who was portrayed in the Biblical account in a mostly villainous or at least antagonistic role, the reaction of King David to hearing of the death of Saul seems, again, somewhat curious and hints that he might not have been such a bad monarch after all. This was the last account we have addressing King Saul when David said, “Ye daughters of Israel, weep over Saul, who clothed you daintily in scarlet, who put ornaments of gold upon your apparel. How are the mighty fallen in the midst of the battle!” It is an oddly positive and remorseful note on which to end the story of a monarch given grudgingly and then demonized as one God had turned His back on. Yet, it set the scene for the start of the rule of King David, known as a man after God’s own heart. The monarchy that Samuel warned against, under David, would be raised to exalted status and his dynasty secured with a covenant giving it a divine right to rule God’s people. For King Saul, he remains a mysterious figure, a monarch wanted, raised and then abandoned, punished and harassed and finally praised in death. There will doubtless always remain more questions about King Saul than there are answers. Nonetheless, his reign marks the beginning of the history of Israel as a united kingdom under one sacred monarchy.