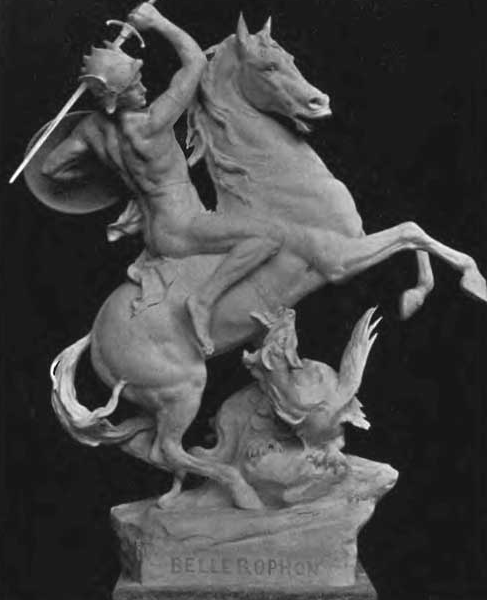 Once again, we look back through the mists of time to the mythic origins of western civilization, of distant Greece long before even Hercules was a twinkle in his divine, philandering dad’s eye. One of the greatest heroes of Greek mythology, and a famous monster-killer, like most of them Bellerophon was a member of royalty. His father was King Claucus of Corinth so Prince Bellerophon was a big shot, strutting around Corinth like a boss. But he wasn’t the only son and, of course, there was drama. The ancient myth makers couldn’t seem to get their story straight exactly but many if not most say that one day the fraternal feuding flamed fabulously followed fast by the flight of the famous figure from the frightening form of his former fratello and the filial fury of their father. In other words, Bellerophon killed his brother and split the scene. Rather than join the circus or the foreign legion, he ran away to be the servant of King Proetus of Argos and Tiryns. It worked out alright since Proetus, being a king, absolved Bellerophon of murder and took him on as an employee with great benefits, vacation time and a generous dental plan. Everything seemed to have worked out for Prince Bellerophon. 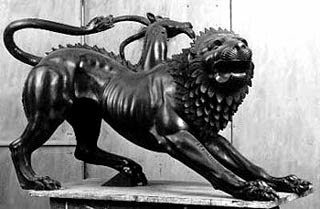 However, he soon got into trouble again as the sight of this strapping young warrior-prince threw the King’s wife into a frenzy of lust. She went into full cougar mode and put the moves on Bellerophon but, knowing that doing the nasty with the Queen would be a bad career move, he resisted her romantic rampage. This resulted in rage! She ran to the Rex to report a rape (sorry, that’s habit forming). Her womanly ego having been bruised, the Queen told her husband that Bellerophon had tried to get her on to the nearest pin-ball machine and the King was properly infuriated. However, since he had pardoned the plucky prince (sorry), he didn’t want to execute him personally. Instead, he sent Bellerophon to his father-in-law with a sealed message basically telling daddy that ‘the bearer of this tablet tried to get freaky with your daughter -please kill him’. However, when Bellerophon had arrived, the royal father-in-law, King Iobates, really put on the dog and didn’t want to get dead prince all over his new carpets so he didn’t really want to kill him either. Instead, he came up with a brilliant plan; he would dispatch Bellerophon to kill the Chimera, a lion-goat-snake that breathed fire and which was becoming quite a nuisance. Sure, it seems fantastic, but in those days you really couldn’t swing a dead cat without hitting some fearsome mutant hell-beast, the whole Mediterranean area was practically infested with them.

So, Prince Bellerophon was dispatched to save the hapless inhabitants of Caria from the Chimera and, the King hoped, get himself killed in the process. First, of course, Bellerophon went to see a fortune-teller because you didn’t do anything without consulting a fortune-teller in those days. Perhaps the seer intended to dissuade Bellerophon from his wild adventure because he told him that, you know, to kill such a beast as the Chimera, you would need, like, a flying horse. So, oh well, best to just go home and sleep it off. Fire breathing lion-goat-snake my aching… Aha! But there was such a creature; the flying stallion Pegasus which, as we discussed last time, had sprang from the gorgon Medusa whose head was cut off by Prince Perseus. And really, who wouldn’t know that to kill a fire-breathing lion-goat-snake you need a flying horse? It’s just common sense. So, Bellerophon took a nap in the temple of Athena and the goddess appeared to him in a dream, giving him a golden bridle to control the horse. He took it, snuck over to Pegasus’ favorite watering hole and grabbed the flying beast when he came to get a drink. All ready to go, he flew off to find the Chimera -which doesn’t seem as though it would be that difficult but, like I said, mutant hell-beasts were a dime a dozen in those days. 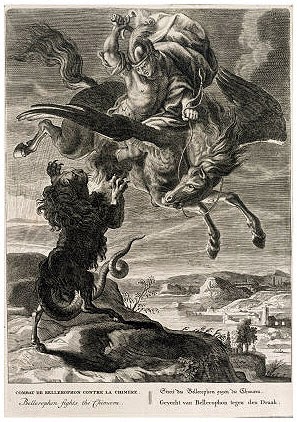 Prince Bellerophon found the Chimera but had a hard time even getting close to it because of the whole fire-breathing thing. Finally, he managed to ram a hunk of lead down the Chimera’s throat. Rather than try to cough it up like most cats would, the Chimera tried to breath fire which then melted the lead and choked the monster to death. So, mission accomplished! Bursting with the pride of the conquering hero, he returned to King Iobates and informed him that he had ridden a flying horse to find the fire-breathing lion-goat-snake which he then chocked to death by stuffing lead down his throat. Shockingly enough, the King didn’t believe him. So, he decided to send him on some more suicidal missions but that darn Prince Bellerophon just kept on winning. He fought off a nest of pirates, a barbarian tribe, defeated the Amazons by dropping rocks on them from his flying horse in the first aerial bombing raid in history. Desperate, the King sent his Royal Guard to just kill him already but, again, Bellerophon survived by calling on the sea god Poseidon (Neptune) who flooded the land around him and was only dissuaded when the ladies at court came rushing out, exposing their naughty bits and “bravely” offering to “sacrifice” their virtue to the noble hero if he would relent. He blushed and called off the rising water but it was clear that King Iobates had been thwarted. He finally came clean with Bellerophon, apologized and even gave the Prince his daughter and half his kingdom in thanks for all his daring deeds. 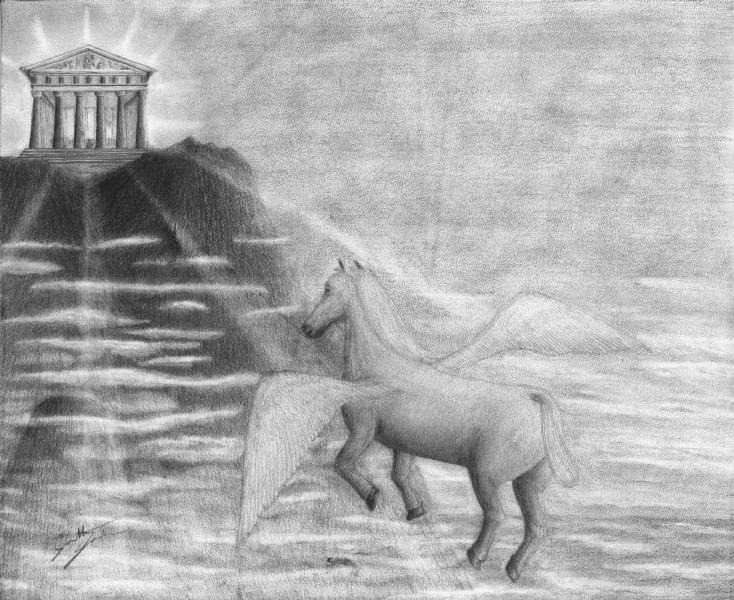 So, Prince Bellerophon was on top of the world. He had a hot wife, half a kingdom all his own and soon a house full of sons. However, even in Greco-Roman mythology, pride goes before a fall and Bellerophon got seriously too proud and had a major, major fall. With all of his glories and victories, the once modest and humble prince became a major egomaniac. Emperor Nero on his most bizarre day couldn’t compete with Bellerophon. He decided that he was worthy to be a god and should not have to stay in the company of mere humans like his wife and children so he saddled up his trusty flying steed and set off to fly to the top of Mount Olympus where the gods hung out. This did not go over well with the King of the gods Zeus (Jupiter) who decided to teach the upstart a lesson. He sent a tiny little fly to bite Pegasus on the rump which caused him to buck (somehow -not sure how that works when you’re flying) and throw Bellerophon back to earth. Ouch. Plus, he landed on a thorny bush. Major ouch. That was the figurative and literal “fall from grace” for Bellerophon who, because of his pride, then had to live out the rest of his life as a poor, blind cripple, isolated from the rest of humanity.
Posted by MadMonarchist at 12:04 AM