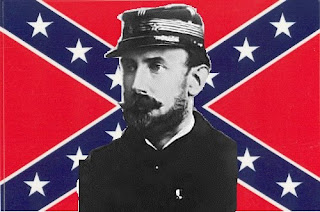 Camille Armand Jules Marie, Prince de Polignac was born on February 16, 1832 at Millemont Seine-et-Oise, France to Prince Jules de Polignac and Princess Marie Charlotte (Parkyns). A member of one of the most prestigious, and staunchly royalist, French families his father was council president under HM King Charles X of France. His father was a passionate royalist and an absolutist which made him a favorite of Charles X. Already a member of the French nobility he was granted the Roman title of Prince by the Pope.

His grandmother Gabrielle had been a famous beauty at the royal court in her day and was a best friend to the ill-fated Queen Marie Antoinette. During the 1840’s the Prince de Polignac studied mathematics and music at St Stanislas College. In 1853 he opted for the military, joining the French army to fight in the Crimean War wherein he was awarded a promotion to second lieutenant. However, still part scholar as well as soldier, he resigned his commission in 1859 to travel to Central America to study geography and political economy.

As it happened he was in the United States when war broke out between the north and south. Finding himself in friendly surroundings amongst the chivalrous cavaliers of Dixie he volunteered to fight for the Confederacy in 1861. With his blue-blood background and prestigious connections he was assured a place in the Confederate officer corps and was, appropriately enough, first made a staff officer under the dapper Louisiana Creole General Pierre G. T. Beauregard, another soldier of gallant temperament, French lineage and the Catholic faith. Later, however, he served on the staff of the irascible General Braxton Bragg, commander of the Army of Tennessee. Nonetheless, he distinguished himself and in January of 1863 was promoted to the rank of brigadier general.

In March of that year he was transferred to the Trans-Mississippi department and assigned to command a brigade from Texas. At first the hard-hitting Texans were less than impressed with their new foreign-born commander, derisively nicknaming him “Prince Polecat”. However, in time this would become a term of affection as much as it was used as the Prince de Polignac earned the respect of his Texans through his skill and bravery on the battlefield. The Prince led his Texans into battle at Vidalia and Harrisonburg, Louisiana in the spring of 1864. However, his greatest moment of glory was still to come.

From March to May of 1864 the Union armies launched the Red River Campaign, aimed at Shreveport, to cut off Confederate supplies from the far west and open the door for an invasion of Texas. In the first major battle of the campaign at Mansfield the Prince de Polignac showed his worth. Despite being considerably outnumbered the Confederates prevailed, inflicting twice as many losses as their own on the Union army and capturing a large number of supplies and munitions. Prince de Polignac was given a battlefield promotion to major general when his superior, Alfred Mouton, was killed. During the attack Polignac led his troops in person, waving his sword over his head as his troops shouted the famous ‘Rebel Yell’. A Union prisoner described the Prince and his Texas as “charging demons” whose crushing assault was “like a cyclone”.

The French Prince led his Texans throughout the rest of the Red River campaign, which ended in inglorious defeat for the Union army, and then to the new posting of his division to Arkansas in the autumn of 1864. With the overall situation of the Confederacy worsening, Prince de Polignac was thought to perhaps be more valuable off the battlefield as an envoy to France where he could perhaps use his family connections to convince the French Emperor Napoleon III to recognize the Confederate States of America and intervene in the war on their behalf, necessary, they argued, for the ultimate victory of French forces in Mexico at the time. Unfortunately, Prince de Polignac arrived too late and it was doubtful Napoleon could have been moved without the British going along with him in any event. Still he was knighted by the Emperor and sent to Queen Victoria on Napoleon’s behalf.

With the war over in 1865, Polignac went back to his original plan and journeyed to Central America. He wrote and served in the French army again as a brigadier general in the Franco-Prussian War. In 1874 he married Marie Adolphine Longenberger who sadly died giving birth to their daughter. In 1883 the Prince married Elizabeth Margaret Knight by whom he had two daughters and one son. He named his son Mansfield in honor of his finest hour. Prince de Polignac retired to a more quiet life, studying mathematics and music until his death on November 15, 1913 at the age of 81, the last surviving Confederate major general. Another interesting note, the Prince de Polignac was a distant cousin of HSH Prince Pierre of Monaco, father of Sovereign Prince Rainier III.
Posted by MadMonarchist at 12:25 AM